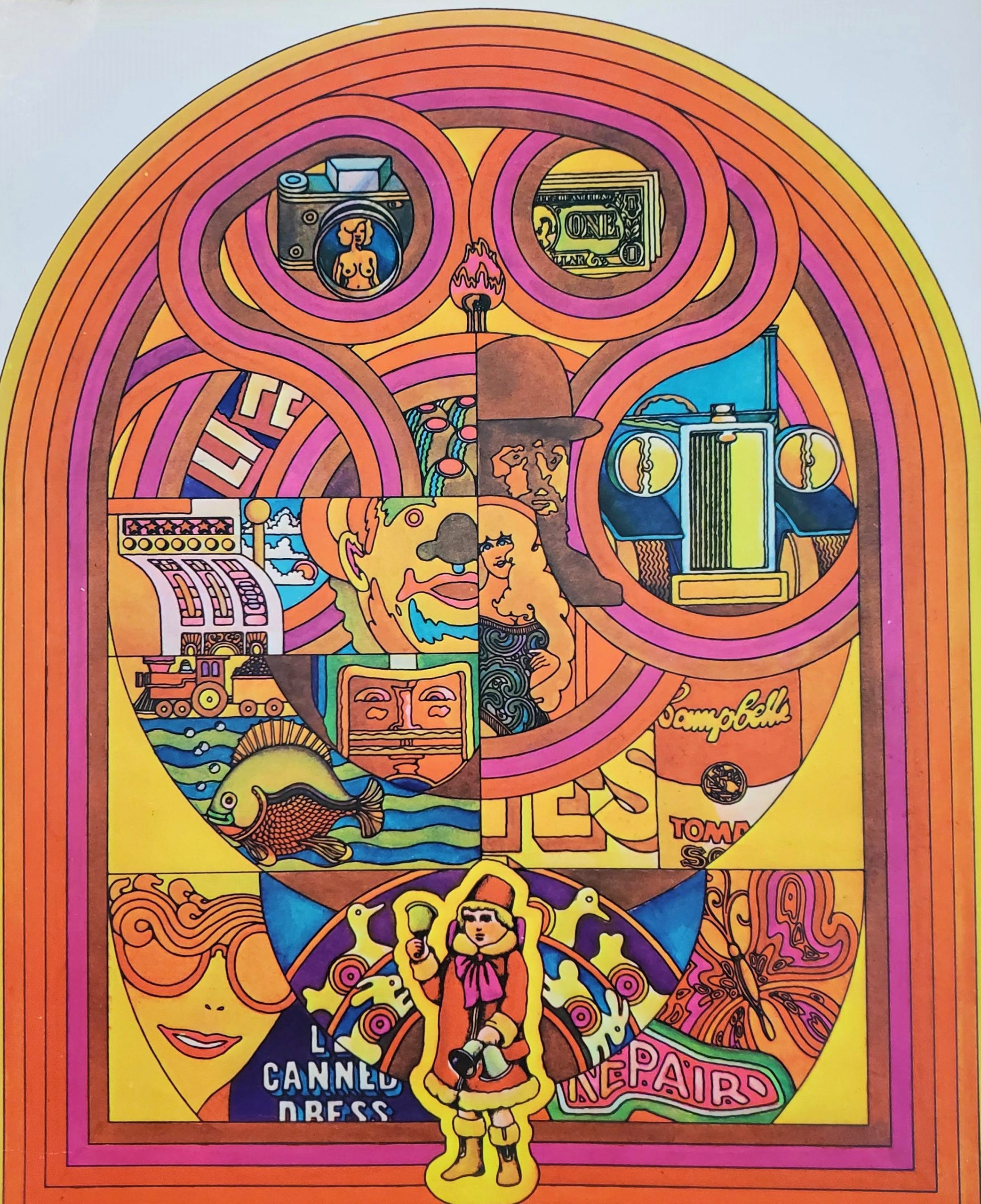 Day-Glo® : a moniker describing shades of orange, pink, green, blue, and yellow so bright they seem almost incandescent. The Day-Glo® Designer’s Guide, a trade catalogue in the Cooper Hewitt, Smithsonian Design Library, was published in 1969 at the height of the psychedelic era. The catalogue celebrates Day-Glo® colors at the peak of their popularity with the youth culture of the time, but the Day-Glo® story began much earlier.

In the early 1930s, brothers Robert and Joseph Switzer, the sons of a pharmacist, began exploring naturally fluorescent compounds.  As an experiment, they took a black light (a long-wavelength, ultraviolet lamp) into their father’s storeroom where they observed a number of drugs glowing. The compounds were excited by the lamp’s invisible light. The brothers combined some of the compounds with pigment and shellac. They painted the fluorescing mixtures on props and costumes that Joseph would use in a magic act. Their interests piqued, the brothers worked to develop the first black light fluorescent paint. To exploit its commercial potential, the Switzers started a business in 1934.

The glowing pigments were initially used in merchandizing and industry, for posters, displays, and safety applications. Near the start of World War II, the brothers developed a “daylight fluorescent” pigment. During the war, the US military put the pigment and pigment-treated fabrics to multiple uses, such as visual aids for pilots making night landings on aircraft carriers. Throughout the 1940s and 1950s, the Switzer brothers created new paints, and in 1952, their company obtained a federal registration of the trademark “DAY-GLO®”.  In the 1960s, fluorescent paints and inks flourished in advertising, packaging, graphics, and the arts. The brothers took two important actions in 1969: they changed the name of their company—known since 1946 as Switzer Brothers, Inc., it became the Day-Glo Color Corporation; and they published this catalogue to showcase their industry-leading work.

Day-Glo found its way into all forms of commercial graphic design and fine arts, such as Bert Stern’s 1968 series of Day-Glo serigraph prints of Marilyn Monroe below (originally published in Avant Garde magazine).

In the hedonistic youth culture of the 1960s and early 1970s, black light-illuminated Day-Glo®  imagery became popular in night clubs and discotheques. Fluorescent pigments created a color-saturated, “mind-blowing” psychedelic experience; revelers felt transported to another world. A generation of pop artists adopted Day-Glo® pigments as an expressive medium. Furnishings, clothing, and accessories colored with Day-Glo® appeared more vibrant and “hip” to consumers than those in conventional palettes. Dayglo posters advertising rock concerts make me think of the summer of love and Woodstock, 51 years ago. Woodstock was a music festival labelled 3 Days of Peace & Music”, held August 15–18,1969, in Bethel, New York. It attracted an audience of more than 400,000. The festival has become widely regarded as an iconic moment in rock music history as well as a defining event for the counterculture generation.

I remember when the iconic album cover for Disraeli Gears, by the British rock band Cream, first came out (image above, top right). It was revolutionary—appreciated by contemporary music and art lovers alike. It just seemed like the coolest, most amazing album cover out there. Disraeli Gears was a shock to the eye and traditional sensibilities—wildly colored, psychedelic, and mysterious.

Many of these images are fondly nostalgic to me. Undeniably eye-catching, these colors found their way into advertising, packaging, fashion, and the fine arts. They became a symbol of 1960s pop culture. In today’s high tech world of digitally-produced visuals, the Day-Glo® palette may be just another bygone medium. Despite their age, the dazzling hues remain a part of popular culture: instantly recognizable tropes of 1960s psychedelic exuberance.

Elizabeth Broman is a Reference Librarian at the Cooper Hewitt, Smithsonian Design Library.