Shading Us From the Elements, 19th Century Style 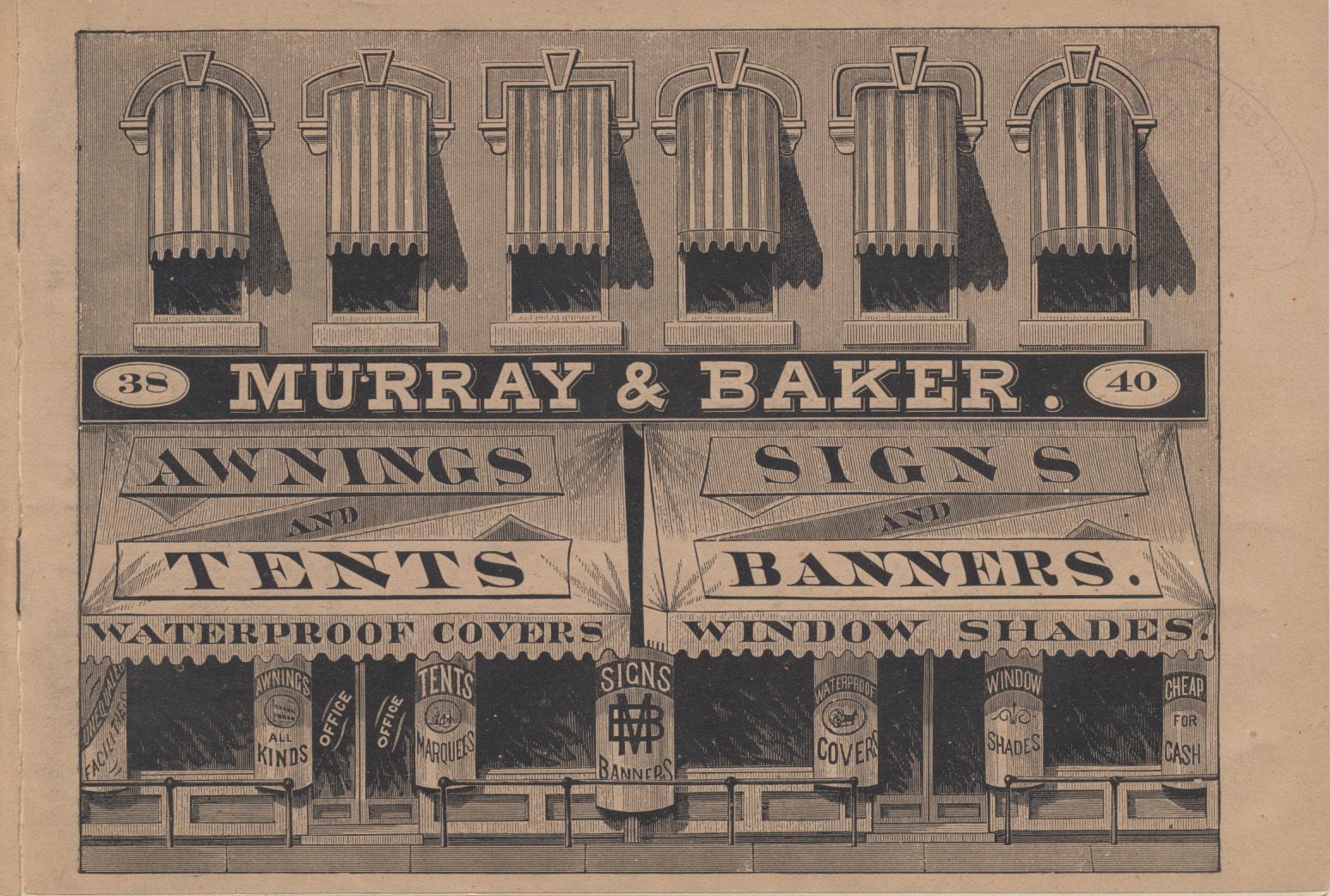 As I removed the trade catalog from its protective envelope, the awnings on the front cover caught my eye. It reminded me of visits to my grandmother as a child and the awnings over the windows of so many houses and stores in her neighborhood. Once I opened the catalog, and just as the title suggests, I realized Murray & Baker sold much more than awnings.

The trade catalog is titled Awnings and Tents, Signs and Banners (1882) by Murray & Baker. After browsing through it, I noticed a theme. Many of the products provided protection from the elements, whether sun, rain, or other weather conditions. It includes awnings and window shades for buildings; seat awnings; tops, and umbrellas for wagons, buggies, and phaetons; and even waterproof covers for horses. A separate section is devoted to tents and camping equipment.

First, let’s take a look at the awnings. Just as the front cover illustrates, Murray & Baker sold awnings for residences, offices, and stores. These awnings shaded occupants from direct sunlight but also added a decorative touch. Besides detailed installation instructions, the catalog provides directions to correctly measure door and window frames. For windows awnings, the shape of the top of the window was particularly important. It might have been a semicircle, segment, or oval shape. Other possibilities included square or round corners.

Another 19th Century protective covering in this catalog is the seat awning or buggy top for wagons. The Garden City Buggy Top is described as an improvement over older seat awnings. It was adjustable with the ability to be positioned towards the front or back. This sheltered drivers and passengers from the hot sun or blowing rain. For those who preferred open air, the buggy top was collapsible, as one driver shows below.

How about a large umbrella for the buggy instead? This was another option for wagons, buggies or phaetons to shield passengers from the sun. The phaeton umbrella was available in a variety of colors. The choices were brown or buff for the outside while the inside came in blue, green, or buff. The adjustable holder was a handy feature to position the umbrella at any angle.

Sun and warm temperatures might bring to mind camping, and this is exactly the type of equipment described in another section. What did a family in the late 19th Century bring on a camping trip? Perhaps, the Family Tent which consisted of several rooms. Its focal point was the dining room located in the center of the tent. Two to four bedrooms surrounded it depending on the size of the tent. A built-in feature was the awning. By simply lifting a portion of the tent wall and supporting it with poles, an awning was created. This provided tent occupants, like the person in the illustration below, with the luxury of enjoying fresh air and shade from the sun.

What furnishings would you have brought to a campsite in 1882? Perhaps cots, tables, chairs, and maybe the Combination Trunk. Besides a trunk, it also served as a cupboard and table. Once expanded, the trunk transformed into a tabletop with three shelves underneath. If a combined trunk, cupboard, and table was unnecessary, Murray & Baker also offered simple tables, either single or double folding tables.

For beds, there were several options. One type was the Patent Double Folding Bed. Weighing only 30 pounds, it folded into a compact bundle measuring 6 feet 3 inches in length and 10 inches by 3 inches thick when not in use. Though it required no mattress, perhaps campers might have used the rubber air pillows and waterproof camp blankets mentioned later in the catalog.

Another essential item at a campsite was most likely a chair. Murray & Baker offered several seating options that conveniently folded. This included chairs, benches, and stools. Due to its canvas seat and back, “The Repose” Folding Chair appears a bit more comfortable than the stools or open back chair. It was advertised as “a most luxuriant chair for the camp or garden, arranged so as to give perfect rest.” If several people needed a seat, the seven-foot long Canvas Seat Bench was an option. Perhaps it was useful alongside the folding tables at mealtime.

When it came time to fish or simply relax on the water, campers might have turned to the light and portable folding boat. According to the catalog, it required just five minutes and one man to open or fold it. Jointed oars, rowlocks, seats, and a trunk were included.

The catalog ends with a section unrelated to camping. This section is focused on waterproof wagon and horse covers. One type of horse cover extended from the horse’s tail to shoulder while another extended a bit farther to about twelve inches above the shoulder of the horse. To cover the horse’s head, some coverings included a hood joined to the main, body cover. Others had separate hoods and covers, like the horses below are wearing. These look a bit like raincoats for horses!

Awnings and Tents, Signs and Banners (1882) and another trade catalog by Murray & Baker are located in the Trade Literature Collection at the National Museum of American History Library.