Upcoming Event: What Was James Smithson Doing in the Kitchen & Classroom? 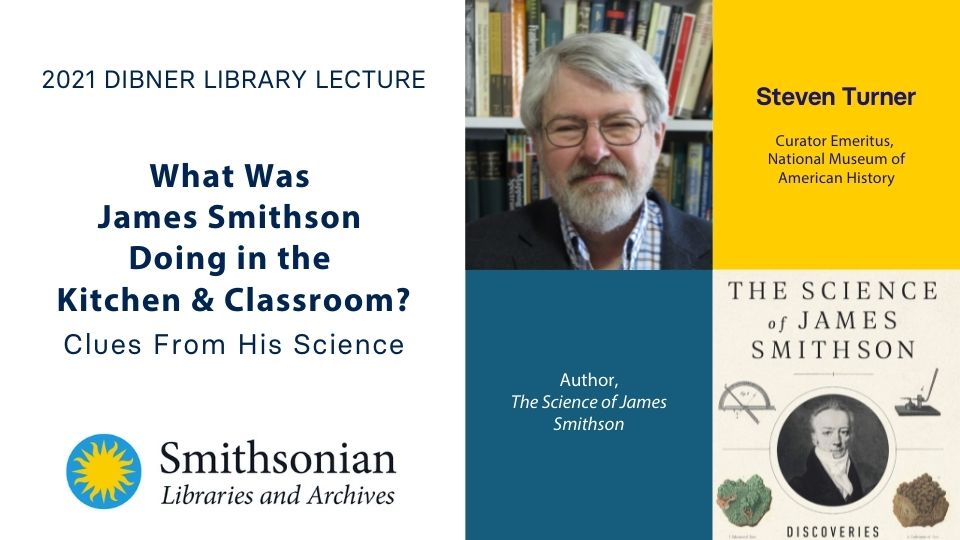 The Smithsonian Libraries and Archives invites you to join us for our 2021 Dibner Library Lecture, featuring Steven Turner, “What Was James Smithson Doing in the Kitchen & Classroom?”

James Smithson was an 18th century English chemist, geologist, and mineralogist – and also the founder of the Smithsonian Institution. Most of what we know about Smithson’s science comes from his twenty-six published articles, which Steven Turner studied in his recent book, The Science of James Smithson (Smithsonian Books, 2020). Turner argues persuasively that Smithson was much more accomplished than previously thought. And he shows that Smithson made important contributions to a wide range of scientific fields, including: chemistry, mineralogy, geology, botany, electricity, and even meteorology.

About the Speaker:
Steven Turner is a historian of science and for 32 years was curator of Physical Sciences at the Smithsonian Institution. His research interests include the history of physics, the history of chemistry, and the uses of scientific instruments. For many years he edited the science history journal Rittenhouse, and he contributed to numerous exhibits and web projects. Towards the end of his career, he became interested in the English chemist, James Smithson, the founder of the Smithsonian Institution. Because Smithson’s scientific writings are famously difficult to follow, in addition to conventional historical research, Turner made extensive use of replications of Smithson’s experiments, many of them with the same tools and natural materials that Smithson would have used – which sometimes yielded surprising insights. Turner’s book, The Science of James Smithson, was published in the fall of 2020.

Registration
Register for this program via Zoom. You’ll also get an opportunity to opt in to receive emails from us, including invitations to future programs.

We are committed to providing access services so all participants can fully engage in these events. Optional real-time captioning will be provided. If you need other access services, please email SLA-RSVP@si.edu.  Advanced notice is appreciated.

This program will be recorded and made available following the event. You will find it on the event page and on our YouTube channel.

This program is part of the Smithsonian Libraries and Archives’ commemoration of the 175th anniversary of the Institution’s founding.