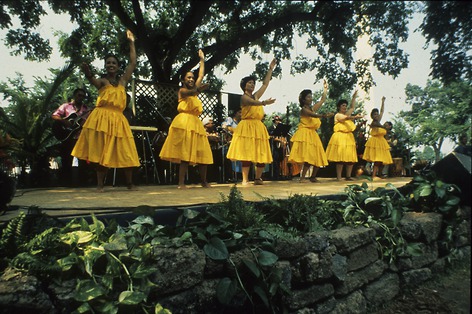 1996 marked the 150th anniversary of the Smithsonian Institution. It was also in that year that the Office of Public Affairs (OPA) published Asian Pacific American Resources at the Smithsonian. This resource brochure was meant to aid teachers, students, and researchers by providing them with information on Smithsonian collections, databases, publications, fellowships, internships, and more that were of significance to Asian Pacific Americans. The OPA also produced similar brochures on African and African American, Latino, and Native American resources.

One of its earliest actions was to organize, along with the Smithsonian Center for Museums Studies, now known as the Smithsonian Center for Learning and Digital Access, a program for museum professionals: “Diversity, Leadership, and Museums: The Representation of Asian Pacific American Communities.” It was held at the Japanese American National Museum and explored diversity issues in museums, examined current issues affecting Asian Pacific Americans in the museum profession, and emphasized problem-solving strategies, team-building techniques, and communication skills.

The month of May is Asian Pacific American Heritage Month and I would like to share the following statement from Dr.  Gonzalves:

As we mark another commemoration of Asian Pacific American Heritage Month, we have to acknowledge how this time feels different. A global pandemic has shaken our communities to the core, revealing long-standing and often unacknowledged inequalities. Our families in Atlanta, Indianapolis, and throughout the nation continue to shoulder the pain of losing loved ones to violence and harassment. Please remember to take time to support each other as we try to make sense of these times. Usually, these month-long events in May have been wonderful ways to gather up our voices to celebrate achievements. We would share songs, food, ritual, and stories. And while this year we grieve, let us also strive to find the humanity in each other. We wish to see the fullness of who we have been, who we are, and who we can still be. We are more than what has been done to us. We bear witness to and participate in calls for racial equality, justice, and much-needed kindness and healing. Our Asian American and Pacific Islander traditions demonstrate unity and care for each other. On behalf of everyone at the Smithsonian Asian Pacific American Center, I invite you to live out these ideals with us not only in May, but throughout the year.

In the past few years, the Center has invited audiences to explore its care package of poems, meditations, and more in response to the COVID-19 outbreak and its repercussions.