The Long Life of a Dead Rhinoceros 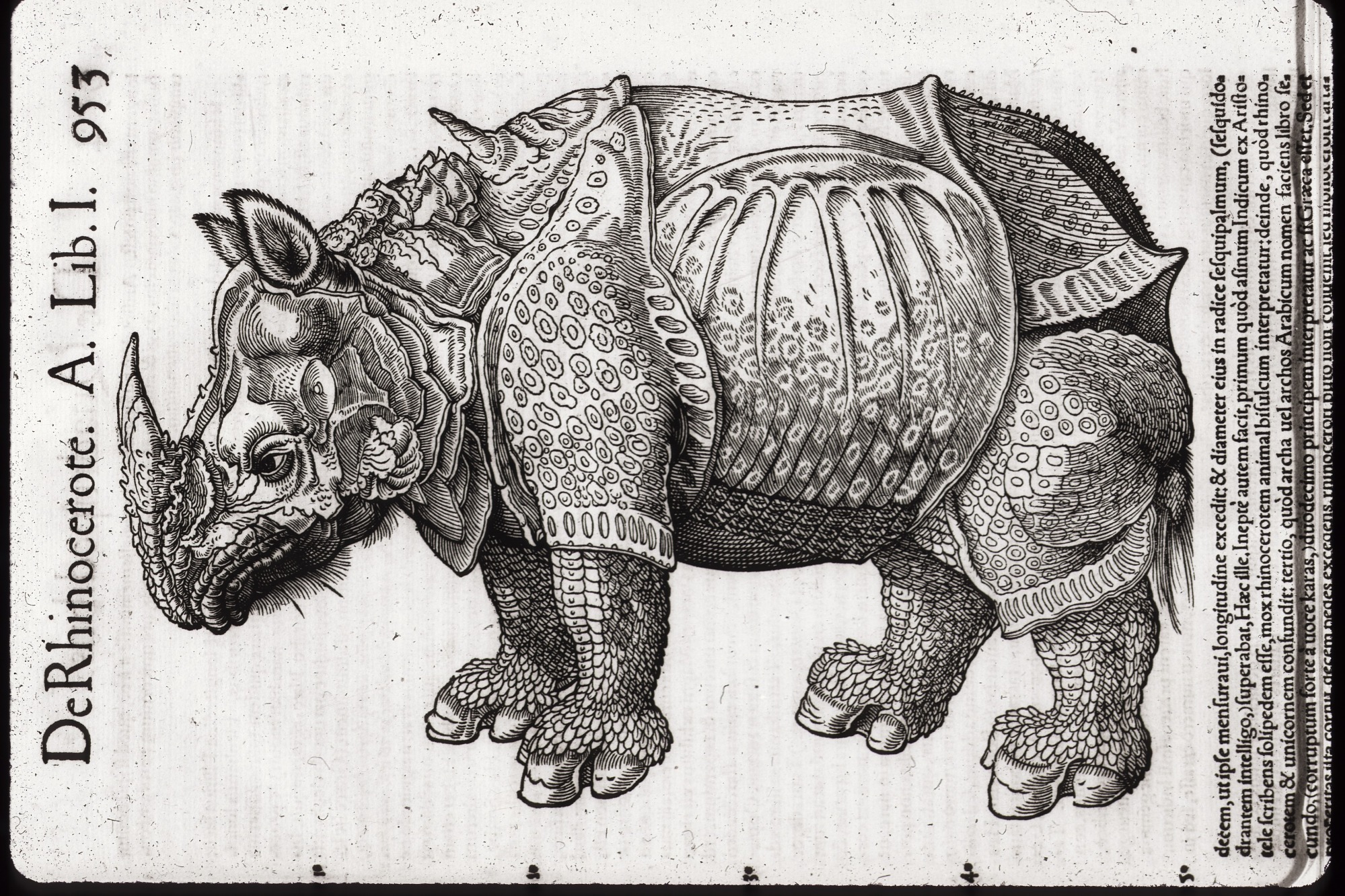 Dr. Jason Cavallari is an intern with the Smithsonian Libraries and Archives in pursuit of a certificate in Digital Humanities from George Mason University. He is also an administrator and lecturer in history at Boston College.

This is precisely what happened when the artist and engraver Albrecht Dürer drew what he imagined a rhinoceros to look like when he first read a description in 1515. In the early 16th century, as Europeans had started to explore the world beyond the Mediterranean Sea, they came in contact with a great many creatures that few, if any, Europeans had ever heard of. Manuel I, the King of Portugal, had recently established Portugal’s first colony in India and offered an Indian rhinoceros to Pope Leo X as a gift. This is the rhinoceros that captured Dürer’s imagination. Unfortunately, the rhinoceros died on its way to Rome, so little remains of the actual animal except for the brief description and sketch that Dürer used to create his famous woodcut.

Take a look at Dürer’s rendition of the rhinoceros:

Close observers will notice that Dürer’s rhinoceros broadly resembles what an actual rhinoceros looks like. Notice, however, that Dürer took a number of liberties with his rendition. The skin of the rhinoceros looks like European plate armor; while rhino skin may be described as “scaly,” it’s not actually made of scales like the legs depicted here; and there is an extra small horn on the rhino’s back along with a saw-toothed ridge on the rhino’s hindquarters.

If Dürer had been a nobody, the story might have ended there. However, Dürer was a very well-known artist, having been under the patronage of the Holy Roman Emperor Maximilian I. As a consequence, Dürer’s rhinoceros became the most recognizable image of a rhinoceros in Europe for almost three hundred years!

Dürer’s rhino was so influential that early scientific texts took it as understood that Dürer was correct in his depiction of the animal. Consequently, whenever an illustration of a rhino was needed, publishers either copied, imitated, or reprinted Dürer’s famous image. For example, the Swiss doctor Conrad Gessner published his Historia animalium in 1551, the first-ever zoological inventory that attempted to catalog all known animals. In it we find the following illustration of a rhinoceros:

Look familiar? A scientific work published almost 40 years after Dürer’s engraving used the exact same image as an accurate depiction of a rhinoceros. And Gessner wasn’t the only one to make this mistake. In 1598, Italian writer Filippo Pigafetta included Dürer’s rhino in his translation of Regnum Congo, a description of the Kingdom of the Congo in Africa. And in 1650, the Polish scholar Jan Jonston (Joannes Jonstonus) used Dürer’s rhino in his natural history book Historiae naturalis de quadrupedibus libri – 135 years after the original image!

How did such an inaccurate representation become the standard image of a rhinoceros for so long? Well, it wasn’t until the middle of the 18th century that more Europeans began to be able to observe exotic animals directly and report their findings. The first time many Europeans had an opportunity to see a rhinoceros was when the Indian rhino Clara toured all over the continent from 1741-1758. Furthermore, scientists and explorers fueled by the intellectual curiosity of the 18th-century Enlightenment began to rely more on the benefits of direct observation than on hearsay and tradition. Some even took direct aim at Dürer’s famous image in pointing out its erroneous information, like the German explorer Peter Kolbe in the 1727 Dutch edition of his book, Naauwkeurige beschryving van de Kaap de Goede Hoop (An Accurate Description of the Cape of Good Hope):

Today, Dürer’s rhinoceros is more of an intellectual curiosity than it is considered an accurate depiction of a rhinoceros. Still, it continues to have an influence on the arts and has left an indelible mark on our culture – artists from Salvador Dalí to author Umberto Eco have used Dürer’s rhinoceros as an inspiration for their artworks and ideas. It just goes to show that misinformation can have an extremely long life – much like a rhinoceros that died over 500 years ago.

Truitt, James, “Monoceros: What Conrad Gessner’s discussion of the unicorn tells us about natural history in Renaissance Europe” (2017).