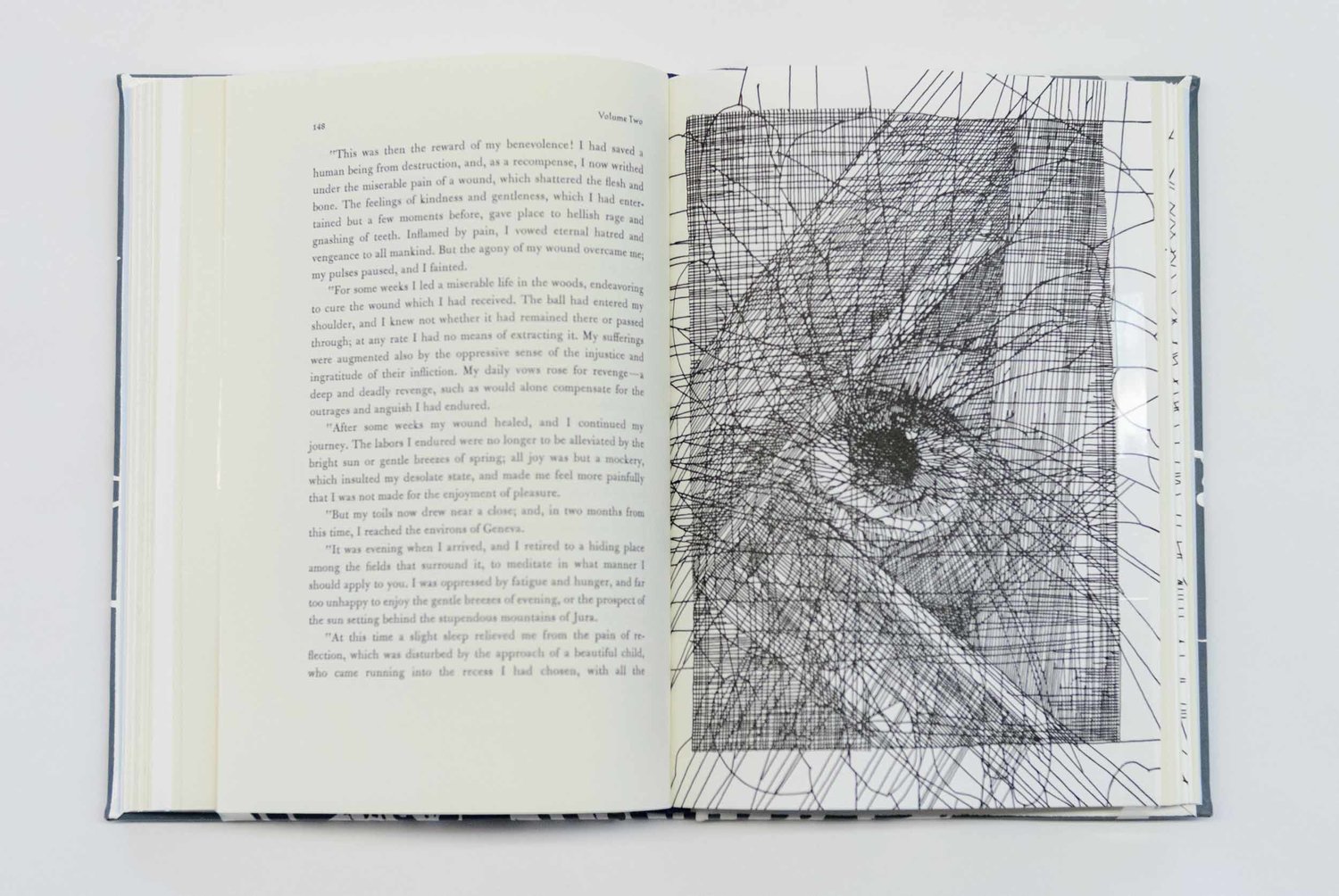 “It’s alive!” During the spooky season celebrated around Halloween, decorations and costumes of classic pop culture creatures abound, like Dracula, the Wolfman, and Frankenstein’s monster himself. Our modern conception of Frankenstein is a loveable zombie, tall and dopey with green skin and spiky hair, bolts and stitches. Originally published in 1818, Frankenstein, or The Modern Prometheus actually tells the story of Dr. Victor Frankenstein and his ill-fated desire to create the “perfect being.” The author, Mary Shelley, explored the consequences of playing God, the corrupting influence of misdirected ambition, the possibilities and limitations of science. Frankenstein’s “Creature” has fascinated readers for over 200 years, and Shelley’s work has been published countless times since her lifetime.

The Smithsonian’s American Art and Portrait Gallery Library has recently acquired the 2019 rendition of Frankenstein; or, the Modern Prometheus, published by Arion Press in honor of the original book’s 200th anniversary.

Arion Press specializes in handcrafted fine press books and is known for their collaborations with artists and authors. For Frankenstein, Arion teamed up with American sculptor Tim Hawkinson, working in the book form for the first time. The artist often uses common household or found materials in his inventive sculptural objects and kinetic machines. For this publication, Hawkinson devised a unique technique to create the accompanying images. Affixing a hypodermic needle to a fountain pen and creating a built-in inkwell that consisted of a soda bottle filled with ink, Hawkinson suspended the entire contraption from the ceiling of his studio. The large paper was pinned to a turntable on the wall, and each horizontal mark with the delicate tip of the needle and the turning of the paper on the turntable caused the ink to dribble in unexpected ways. Not only is this artistic technique unique, but this system was just unwieldy enough to seemingly have a mind if its own, an autonomous creation that evokes the novel. The hypodermic needle echoes how Dr. Frankenstein used syringes to bring his creation to life, and how they defied his expectations. The hundreds of straight and sketchy lines come together to create an eye-catching spooky, dreamy vibe that compliments the story.

The Smithsonian holds the deluxe edition of Frankenstein; or, the Modern Prometheus, presented in a wooden box carved in Hawkinson’s same sketchy lines with the image of a ship’s mast and rigging. Each chapter in the book has one of the nine prints created for this volume, giving the reader an image that compliments the narrative as it unfolds.

Interestingly, Hawkinson’s drawings never show the Creature itself, furthering the interpretation that the Creature was perhaps not the true monster, and that it was Dr. Frankenstein himself whose ambition ignored the rules of nature, pushing the scientific boundaries until his own creation destroyed him. There is no correct answer, leaving the reader to speculate and draw their own conclusions.

You can read more about Mary Shelley’s Frankenstein and how she was inspired by the history of 19th-century chemistry and electricity in the Body Electric in the Smithsonian Libraries online exhibition for Fantastic Worlds: Science and Fiction, 1780-1910. In addition, you can read more about Arion Press’ Frankenstein and their production process in their full prospectus on the Arion Press website. Other resources consulted include The Many Editions of Frankenstein, a blogpost from the University of North Georgia Press, October 26, 2018, and Pace Gallery’s information on artist Tim Hawkinson (both accessed 10/28/2022.)

This blogpost was co-written by Amanda Fiske, an intern through SAAM’s Advanced Level Program, and working with the AA/PG Library for the full academic year. She is currently a student in the Master’s in Library and Information Science program at the University of South Florida.