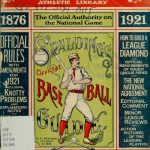 This month, we commemorate the arrival of Spring by highlighting the addition of several turn of the century baseball journals into the Smithsonian History, Art, and Culture (SHAC) digital collection. According to SILRA’s leading information specialist, Mike Hardy,

These books cover an early period of organized baseball in the Unites States. Baseball has long been touted as ‘America’s Pastime’ and that was never more true than in the late 1800s and early 1900s. We think of the major leagues and minor leagues today but there were so many more at the turn of the 19th century. These sports record almanacs have all the statistics we know today – plus a big extra: team photos from leagues large and small, from all over the country. Patrons have contacted us looking for information about relatives who used to play in these leagues. This is a superb collection of the best in baseball sports almanacs.

Baseball’s burgeoning popularity is evident throughout these volumes. For example, found early in the text of a 1905 issue of Lajoie’s Baseball Guide, The Reverend Thomas B. Gregory penned an amusing defense of baseball relative to religion when an outdoor sermon attracted a substantially smaller crowd than the baseball game the next field over.  The crowd’s choice of Sunday activities had little to do with the depravity of the population, the Reverend surmises, rather more concerning the dreariness of indoor life at “mill, shop, and office.” Further, our cultural tendency towards equating baseball with the healing nature of spirituality and religion can be seen in his closing statements:

Aww.  I love America’s love of baseball! The SHAC digitization team hopes you enjoy these new additions to the collection!