The Biodiversity Heritage Library has released a new user interface. The new interface was informed by usability studies and is based on the design and functionality of the BHL-Australia portal.

Improvements to the interface include: 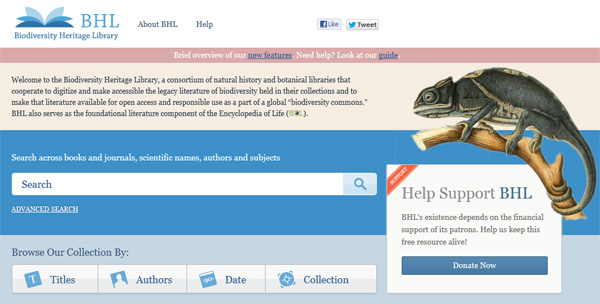 In addition to these changes, BHL will soon implement a new algorithm capable of identifying previously undiscovered taxon names throughout the BHL corpus. Test applications of this algorithm on a portion of the BHL corpus have already resulted in an increase of nearly 50 million names instances in BHL.

These developments follow BHL’s December 2012 milestone achievement of providing access to over 40 million pages and over 110,000 volumes of freely-available biodiversity literature.

BHL partners comprise 15 natural history libraries in the U.S. and the United Kingdom. They are committed to working together to digitize the published literature of biodiversity held in their respective collections and making that literature available for open access and responsible use as a part of a global “biodiversity commons.” The BHL Secretariat is hosted by Smithsonian Libraries. The Technical Director and portal development team are hosted by Missouri Botanical Garden. Affiliated BHL projects have been established in Europe, China, Australia, and Brazil. To further explore the new BHL, visit http://www.biodiversitylibrary.org/.