A Carriage for a President’s Grandchild 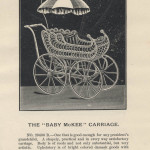 A quick glance at this Butler Brothers catalog, Special Catalogue of Baby Carriages, makes it seem like it is just that–a catalog of baby carriages. But after looking more closely, the page showing the “Baby McKee” Carriage stands out. The description reads, “One that is good enough for any president’s grandchild.” Seeing that led to a little research.

Special Catalogue of Baby Carriages is from 1891. The President of the United States at that time was Benjamin Harrison. His term was from 1889-1893, and there were quite a few family members living with him at the White House. One of these was the Harrisons’ daughter, Mary Harrison McKee, who lived there with her husband, James Robert McKee, and their two children.

And, yes, Mary and Robert McKee had a son nicknamed Baby McKee! His name was Benjamin Harrison McKee. He was almost two years old at the time of his grandfather’s inauguration. During the presidential campaign, he received his nickname.

The “Baby McKee” Carriage was made from reeds with steel springs and wooden wheels. It had brightly colored upholstery along with a parasol “covered with satine with neat lace edge.”

Each of the carriages illustrated in this catalog have a name such as “Little Darling” Carriage, “Sweet Baby’s” Carriage, or “Little Princess” Carriage. There is even a carriage for a first baby, and its name was, of course, “First Baby’s” Carriage. It was described as “the easiest riding carriage possible” and was the highest priced carriage offered by Butler Brothers at the time.

Special Catalogue of Baby Carriages is located in the Trade Literature Collection at the National Museum of American History Library. The Galaxy of Images includes more pages of baby carriages from this catalog.

Seale, William. The President’s House: A History. Volume one. Washington, DC: White House Historical Association with the cooperation of the National Geographic Society, 1986.