Faith Congregational Church in Hartford, Connecticut has a 195 year legacy that includes a noteworthy collection of historical materials, including an extensive collection of historical papers and artifacts. This collection holds  several bibles dating back to the early 19th century, the most famous being the Rev. James W. C. Pennington Bible.  A fugitive from slavery, James Pennington (1807 – 1870) became an internationally known preacher, writer, and abolitionist. He was the first black student to attend Yale University, became an ordained as a minister –  and in 1840 was called by the Talcott Street Church, now known as Faith Congregational Church. A contemporary of Harriet Beecher Stowe and Frederick Douglass, Pennington gained a reputation as a brilliant orator and zealous advocate for human rights.

In 2014, the church responded to the Smithsonian Institution’s call for historical African American artifacts for the new National Museum of African American History and Culture (NMAAHC) , informing them of the Pennington Pulpit Bible in the church’s collection.  According to Nancy Bercaw, Curator of the museum, “Because of the Pennington Bible’s rich history, we would like to give it the attention it deserves and display only this one particular Bible from this church.” Faith Congregational Church subsequently entered a loan agreement with the Smithsonian Institution to exhibit the bible in the Slavery and Freedom exhibition gallery at the new museum.

This past spring, Undersecretary Richard Kurin made an Institution-wide request for support in assistance with conservation, registration, and objects preparation for the scheduled September opening of the National Museum of African American History and Culture.   The Smithsonian Libraries’  Book Conservation Lab volunteered to assist  and  the Pennington Pulpit Bible was selected by NMAAHC staff as an object in need of attention.  It’s condition was poor which made it difficult for display.  The covers were detached and many pages were folded and torn.  The weight of the  textblock had distorted the spine, and the paper was considerably stained.  Since full treatment would require disbinding and resewing, paper washing,  extensive page mending, and a leather rebacking –  it was clear that  the work would have taken an extraordinary amount of time.   An agreement  was made for SIL conservators to stabilize the book for display and, therefore, return the volume in better condition to the lending Church. 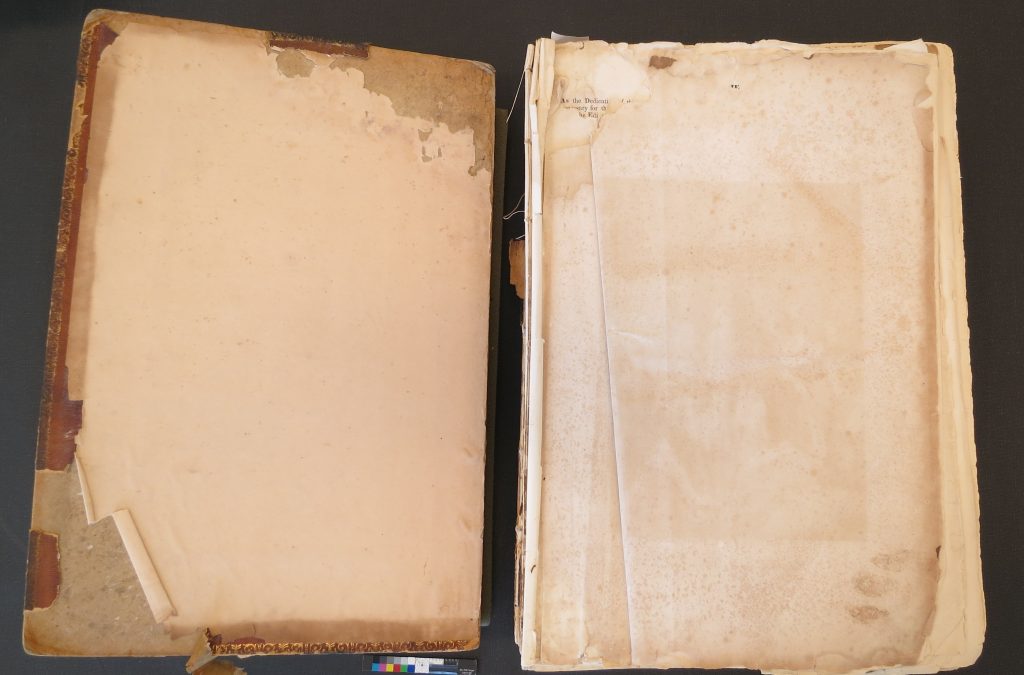 To start,  the spine covering and lining were removed mechanically using a poultice of methyl cellulose.  The textblock was disbound and sections guarded using Japanese paper and wheat starch paste. Paper repair was only performed in areas of the first section.  Each section of the textblock was resewn on linen tapes and new endsheets were constructed.

The spine was lined with two layers of Japanese paper, followed by a layer of aero linen with a final lining of archival paper.

The boards were not reattached, but the textblock is now stable and pages can be turned without causing further damage.

The Bible is still used regularly and its survival can be credited to the high-quality of paper originally used.  The pages now fall open in a graceful manner.

This is a splendid case study that demonstrates that good  materials do matter.