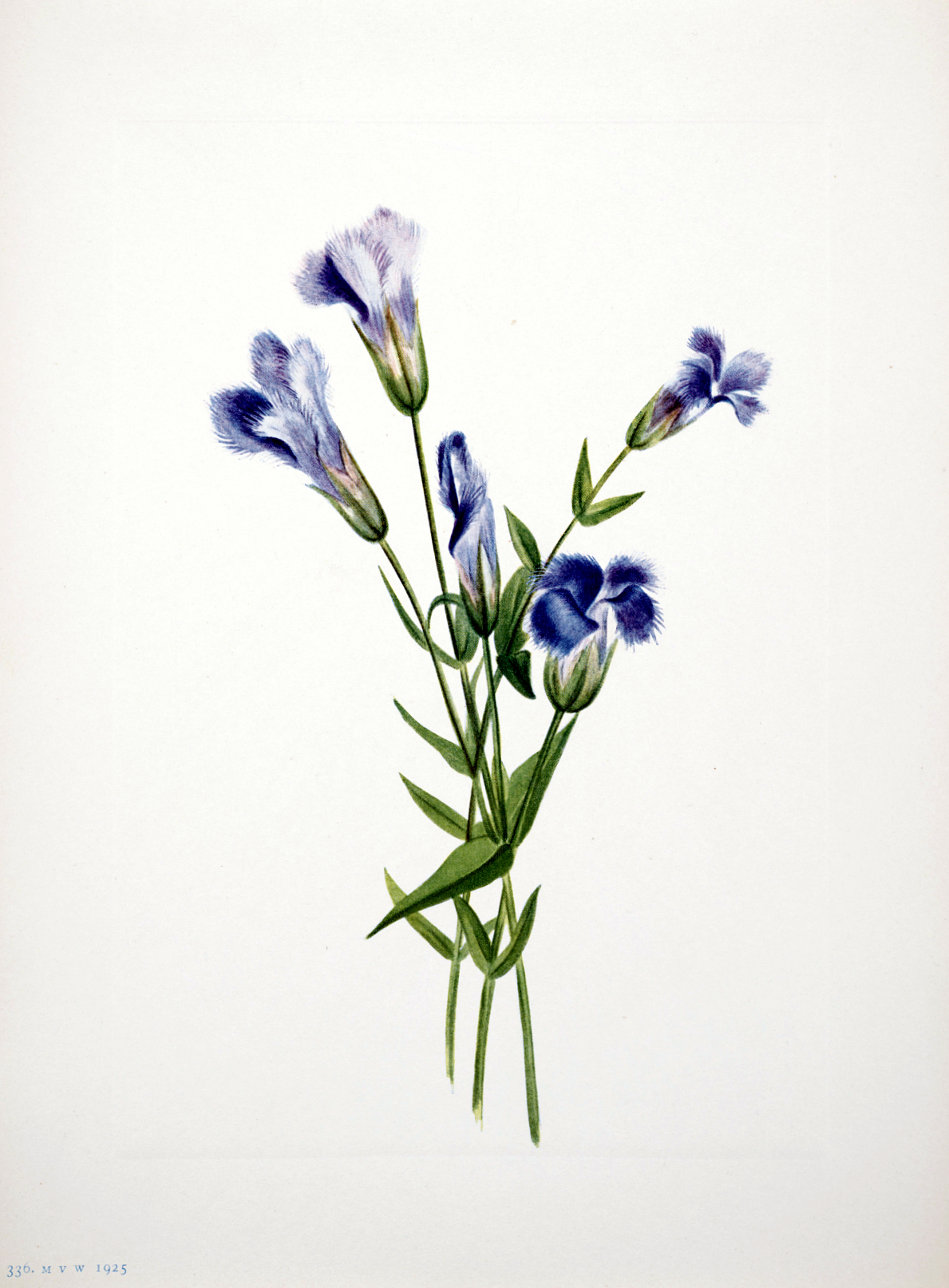 Mary Vaux Walcott (1860-1940), was a botanist, glacial geologist, and artist, whose work was instrumental in the development of a new technique for printing which came to be known as the Smithsonian Process.

From her teenage years, Vaux Walcott summited mountains in the Canadian Rockies, she trekked across the terrain on horseback to collect specimen, studied the movement of glaciers, and at the age of 40, became the first white woman to climb Mount Stephens in British Columbia, Canada. These adventures allowed her to survey the flowered landscape of North America first hand, and she became skilled at drawing, watercolor painting, and photography.

In addition to her adventures, she had a long relationship with the Smithsonian Institution as “first lady”; her husband was Smithsonian Secretary Charles D. Walcott (1850-1927). They worked together during expeditions out west, and Vaux Walcott amassed an impressive portfolio of paintings of flora. Her studies were done quickly in the field, then full watercolor paintings were finished at camp on thick watercolor paper.

Vaux Walcott had lectured and exhibited these works on several occasions when it was suggested she publish her studies and make them available to a wider audience. The result was the landmark 5-volume publication North American Wild Flowers published by the Smithsonian Institution, between 1925 and 1929.

The book incorporated 400 images showing off Vaux Walcott’s knowledge as a botanist and skill as an artist, and it pushed boundaries in color printing for the early 20th century. The print technique was devised by William Edwin Rudge (1876-1931), a printer that Vaux Walcott met during an exhibition of her artwork at the Anderson Galleries in New York City while she was in the early stages of considering the book. Rudge had been experimenting independently with printing on heavier rag papers, which were made up of cotton “rag” fibers and known to resist fading and wear over time, and the delicate renderings and colors necessary in the North American Wild Flowers project gave the opportunity to put it into production. Under previous processes, thick and naturally textured rag paper would be pressed too smooth by the metal printing plate. Rudge’s work was particularly interesting to Mrs. Walcott, who had wanted the final printing to be as close to her original watercolor paintings as possible.

Rudge used plates produced by the Beck Engraving Company, and ran layers of waterproof ink on heavy paper, which was not allowed to dry fully between printings of each individual color. As a final step, the full page was dipped in water to gently raise the cotton rag fibers of the paper again, and each sheet was hand-dried, making the image look like the rougher surface of the original watercolor paintings. This means of printing became known as the Smithsonian Process and was said to have produced the “most faithful color reproduction” of its day. Vaux Walcott wrote to a friend in 1924 that “the result is a reproduction that can hardly be told from the original sketch” and that North American Wild Flowers would be “the first time that such a work has been attempted since the production of Audubon’s Book of Birds” one hundred years earlier. Rudge demonstrated the Smithsonian Process to an audience of 200 publishers, scientists, and museum directors in 1925, to which one newspaper reported that “only when a strong magnifying glass was used was it possible to tell the difference…” between the original painting and the printed page.

The five volumes of the book were to each have 80 loose plates with the title page and letterpress text designed by noted typographers Frederic and Bertha Goudy. The wild flowers were “natural sized,” and therefore printed in larger format. The Smithsonian Institution did not have a budget for publications of this kind, so the work was to be printed on subscription, with a limited de luxe set of signed and numbered copies reserved for $500 each in advance, which would hopefully fund later volumes and a trade edition planned that would be affordable to students and libraries. Both Charles and Mary Vaux Walcott spent considerable time and energy soliciting subscriptions from wealthy acquaintances from the very beginning stages, since they knew they could not begin to pay for production until they had at least 100 books reserved. Their campaign was successful—J.P. Morgan generously reserved three copies in 1924, for example—however, the publication costs ballooned and even the Smithsonian’s accountant expressed concerns with the project. In addition to unsuccessfully applying for grants, the Walcotts helped personally finance the project to see it through to completion, as the 1920s proved to be difficult financial period for the Smithsonian Institution. The endeavor in its entirety cost nearly $750,000, and while it sold well overall, individual set prices were not enough, and remaining stock was finally sold to a book dealer in the 1960s.

The final cost may have been great, but North American Wild Flowers was a success in its conception and production. It was the magnum opus of an accomplished artist and naturalist, with a subject that appealed to a wide audience, and design and publication that proved an important landmark in book and art printing of the time. Today, the original 1925 volumes are owned by nearly 400 libraries and has been fully digitized on the Biodiversity Heritage Library, and the later abridged re-print is in over 1600 libraries worldwide. The Smithsonian American Art Museum has many of the original artworks, and the Smithsonian American Art and Portrait Gallery Library (AA/PG) owns the author’s own personal set of her the publication North American Wild Flowers, generously donated by Secretary Walcott’s great, great granddaughter in 2018. Plates and ephemera related to Vaux Walcott and North American Wild Flowers are on display at the AA/PG Library until summer 2019.

Naples, Richard. “For Camping Month: How to Share a Tent with a Smithsonian Secretary.” Smithsonian Libraries Unbound blogpost: https://blog.library.si.edu/blog/2016/06/03/camping-month-share-tent-smithsonian-secretary. Accessed 3/20/2019