Too Marvelous for Words: Ella Fitzgerald’s Books at the National Museum of African American History and Culture Library 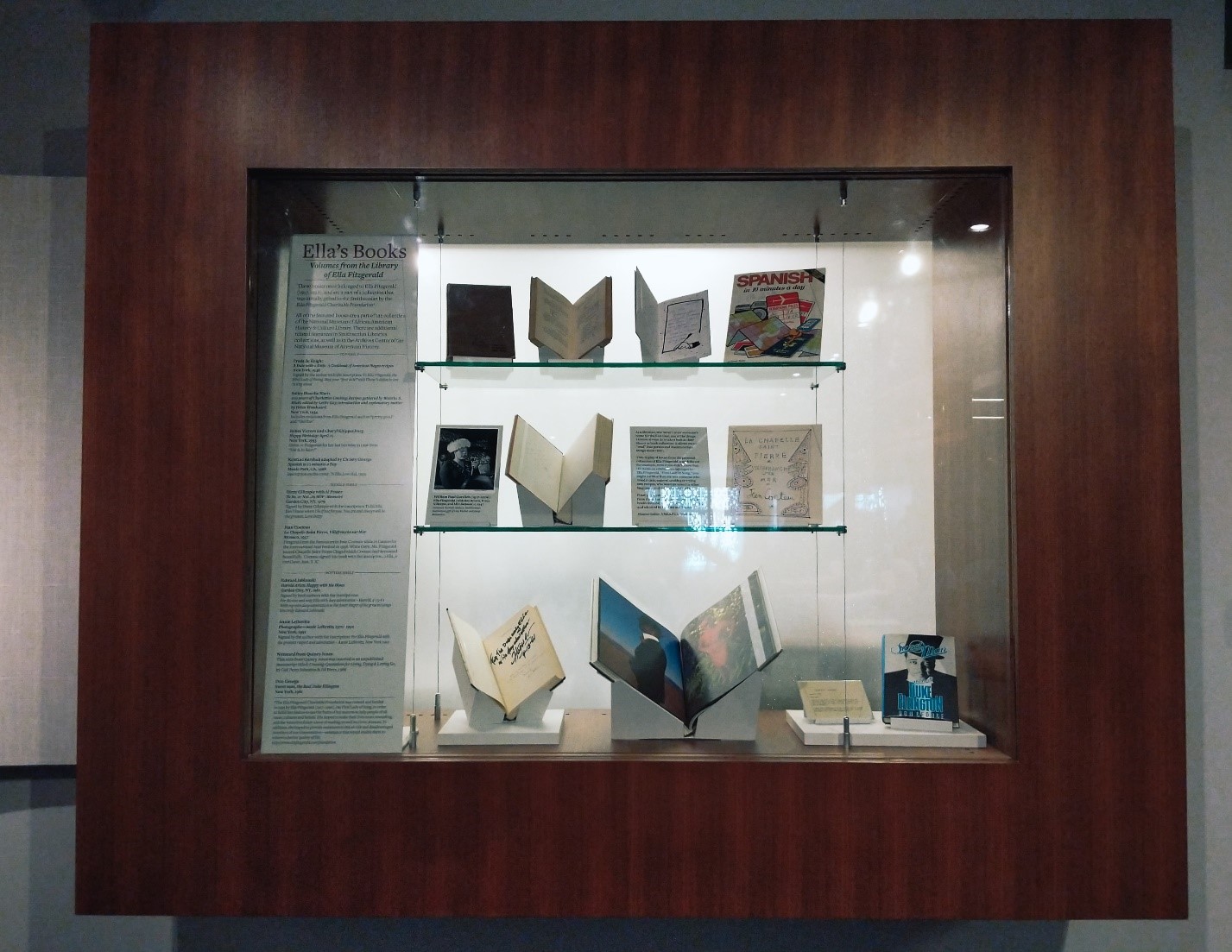 You can’t talk about Jazz Appreciation Month without Ella Fitzgerald. Fitzgerald is known as the First Lady of Song. Many know that she was a world-renowned songstress, sang “A-Tisket, A-Tasket”, and that she was from New York. But not all know about her collection of magazines, books, photos, and jazz materials. She was said to have ceiling-high bookshelves in every room of her house. Many of the books were gifts from admiring celebrities, musicians, authors, and artists.

In her collection, she kept personal items, gifted materials, and correspondence. We are able to gain insight into her life, interests, and those she collaborated with, like Louis Armstrong. Fitzgerald had three successful albums with Louis Armstrong and their album “Porgy and Bess” is in the Grammy Hall of Fame. When you visit the Magnificent Obsessions: Why We Collect exhibit on view in the National Museum of American History, you’ll see her copy of French magazine, La Point. Why this magazine? This issue features other music legends such as Mahalia Jackson, Earl Hines, and Louis Armstrong. Ella would keep magazines that mentioned either herself or other musicians she favored.

Throughout the Smithsonian’s museums and libraries, dedicated pieces showcase the importance of music and those who shaped it for Smithsonian’s Year of Music. For example, in the National Museum of African American History & Culture (NMAAHC), the Musical Crossroads exhibition on the fourth floor showcases many African-American artists, including Ella Fitzgerald.  Also on display is the NMAAHC Library’s current exhibit, Ella’s Books: Volumes from the Library of Ella Fitzgerald, which is a separate exhibit right outside of the Library on the second floor of the Museum.*  In the exhibit you will find more of Fitzgerald’s varied collection from cookbooks with annotations made by Fitzgerald herself, to a personal note from Quincy Jones, and to books gifted to her from her friends and fellow musicians with personal inscriptions.  Perhaps one of the most interesting things about Fitzgerald’s books are the inscriptions and annotations. Being a dear friend of Dizzy Gillespie, she was gifted his memoir To Be, or Not to…Bop signed with a lovely inscription that you’ll need to visit the museum to see.

Besides music, Fitzgerald also took an interest in languages and art. She had books ranging from architecture to fine art, many of which were in other languages. Her books from Annie Leibovitz and Jean Cocteau are displayed in Ella’s Books. In the Ella Fitzgerald collection that was gifted to the Smithsonian, there was a sketch of Fitzgerald, created sight-unseen by Picasso.” It was unclear if she liked Picasso since when he wanted to meet her while she was on a break performing in France, her response was said to have been, “I’m busy darning my socks.” Though it could be safe to say she appreciated the gesture since she kept the drawing.

Ella Fitzgerald was glorious, glamorous and much too marvelous for words, but hopefully, we shed a little light through her own collection of books.

Ella’s Books: Volumes from the Library of Ella Fitzgerald will be on display until December 31, 2019.