Navigating from Sea to Sky to Space: Weems’ Bowditch and the Importance of Private Libraries 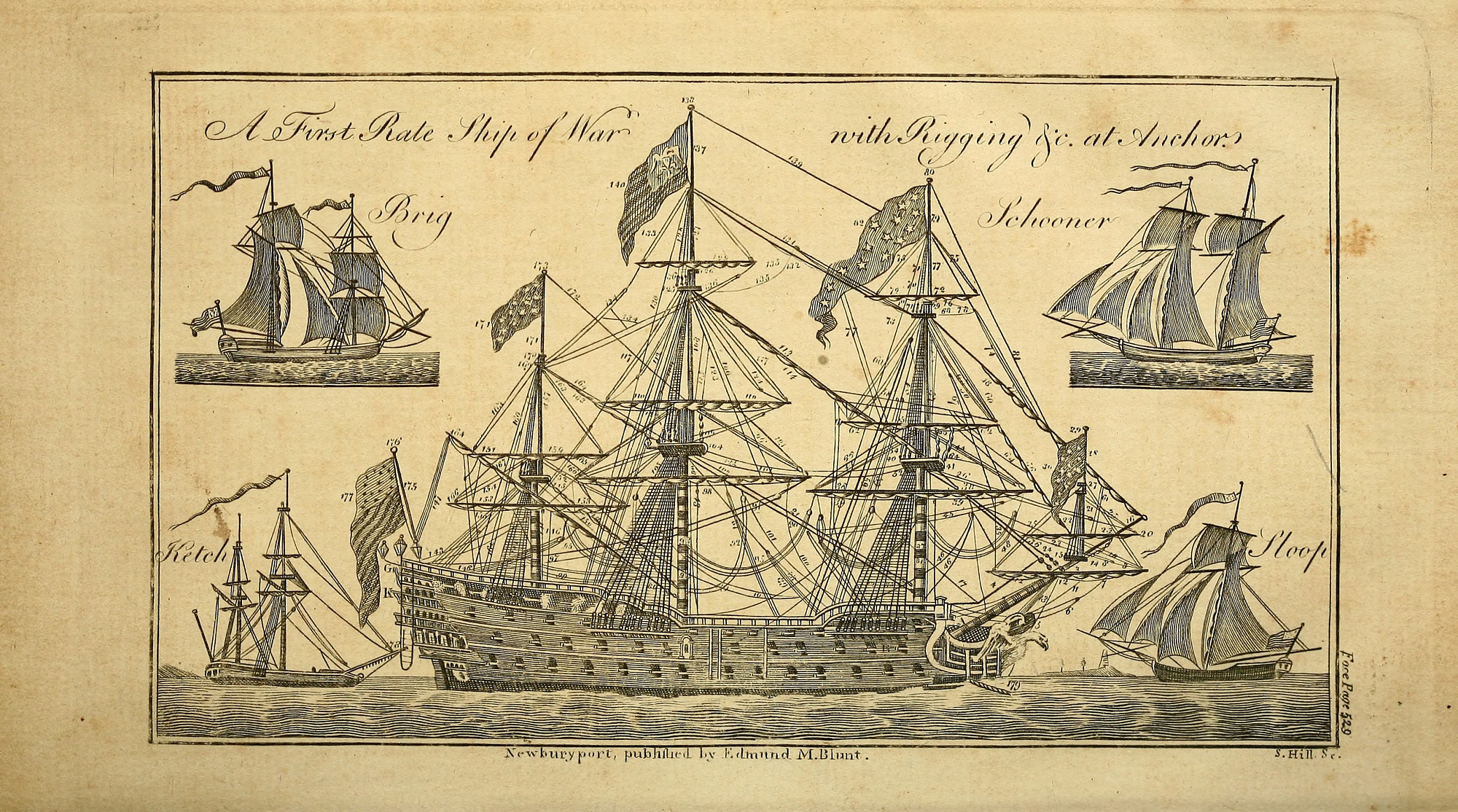 The division of naval history acquired, from Capt. P. V. H. Weems, the Weems Memorial Library and its associated collection of navigational instruments illustrative of the progressive solution of problems posed by aerial navigation from its earliest days. The collection includes a notably fine run of Bowditch’s The New American Practical Navigator from the 1st to 15th editions. Also included are navigation instruments used in the polar flights of Richard E. Byrd and Lincoln Ellsworth.

The donor, Philip Van Horn Weems (1889-1979), was a remarkable and adaptive man whose career encompassed the United States Navy, both as a student and teacher at the Naval Academy in Annapolis, and as a commander; an inventor and businessman of navigational instruments; as well as the author of several books, all aids to navigation. Smithsonian Libraries holds twenty-three of his titles as well as trade catalogs from the Weems System of Navigation company.

Weems was interested and worked in all types of methods of finding one’s position anywhere and determining where one was headed, often with the aim of simplifying techniques, for faster readings and greater safety with the emergence of new technology. This included technological innovations in marine science (surface and underwater), aeronautics, and eventually astronautics.

The 1920s was the period of pioneering endurance flights, most often undertaken by pilots who had not studied navigation. Charles Lindbergh famously sought out Weems for instruction after he had donated his Spirit of St. Louis to the Smithsonian in 1928 (something the press had a lot of fun with at the time, link). In between World Wars, returning from the first of three retirements, Weems wrote Air Navigation (first published in 1931). In the early 1960s, he was summoned back to the Naval Academy to instruct once again, and to active duty to help astronauts navigate space.

Also, during this productive period, when he was in his 70s, Weems went deep sea diving to help locate the pirate enclave of Port Royal. The port city had vanished into the ocean off Jamaica in 1692 in a spectacular earthquake. For that expedition, he developed underwater navigation procedures for mapping wrecks and salvage.

In many ways, Nathaniel Bowditch (1773-1838) was Weems’ 19th-century counterpart. With little formal education, he is generally credited with establishing modern marine navigation. Born in Salem, Massachusetts in strained circumstances, Bowditch was largely self-taught in mathematics, astronomy and languages. He learned both calculus and Latin to study Newton’s Principia (Philosophiae Naturalis Principia Mathematica, first edition was published in 1687). This self-direction was helped by access to the notable scientific library of the Salem Philosophical Society, formed from the pirated collection of chemist Richard Kirwan of Dublin. His volumes were being transported between Ireland and England when it was intercepted by an American privateer fitted out of Beverly, Massachusetts. Kirwan was a friend and colleague of fellow scientist James Smithson, whose library, happily, made the voyage across the Atlantic safely, and is now preserved in the Cullman Library.

There is a wonderful coda to the story of this stolen Irish library that was so essential to the development of Bowditch and parallels the founding of the Smithsonian Institution. Several years after the pirated collection came to Salem, the gentlemen of the Society (later renamed the Salem Athenaeum) offered to reimburse Dr. Kirwan for the loss of his 116 volumes. The enlightened scientist declined, “expressing his satisfaction that his valuable library had found so useful a destination.” (“An Eulogy on the Life and Character of Nathaniel Bowditch, LL. D., F. R. S., delivered at the Request of the Corporation of the City of Salem, May 24, 1838; by Daniel Appleton White; page 43; link). Both the Kirwan and Smithson libraries provided rare opportunities to study works in the sciences in the newly created United States, particularly outside the intellectual hub of Philadelphia.  This was the aim of James Smithson’s famous bequest of his estate to the United States, of course—“for the diffusion of knowledge” in the new country (link).

Undertaking his first voyage in 1795, Bowditch found so many errors in Royal Navy officer John Hamilton Moore’s The New Practical Navigator (first published in 1772; the Dibner Library holds three copies, the earliest is of 1793), that he wrote his own book, The American Practical Navigator (1802). Bowditch promised he would “put down in the book nothing I can’t teach the crew” on celestial navigation, which is said to have included the cook. It was the standard guide for the principles and methods of sea navigation well into the 20th century and Weems’ career. The copyright was taken over by the Hydrographic Office of the United States Navy in 1866 and is regularly updated and is now simply referred to as “Bowditch.” Still considered the “Seaman’s Bible,” it is available for free online.

Bowditch was sought after as an instructor, but he turned down chairmanships from Harvard College, the United States Military Academy at West Point and the University of Virginia. As did Weems, Bowditch had an aptitude for business. As president of the Essex Fire and Marine Insurance Company, Bowditch became America’s first insurance actuary. Later, at the Massachusetts Hospital Life Insurance Company, he was essentially a money manager. But he still studied mathematics and astronomy. Bowditch authored many articles, including observations of the moon, spherical trigonometry, magnetic compass variations, and on the orbits of comets.

Bowditch also translated the first four volumes of Laplace’s Traité de Mécanique Celeste (1829–1839). The Smithsonian Libraries holds many of these works. In addition to the first edition of Practical Navigator, there is a copy of the fourth with the wonderful manuscript note: “William Ripley his book bought in Plymouth year 1819.” One of Bowditch’s articles in the Libraries is “An Estimate of the Height, Direction, Velocity and Magnitude of the Meteor, That Exploded over Weston in Connecticut, December 14, 1807” (record link).

To continue his own independent study, Bowditch amassed his own significant scientific library. Following his death his son, Dr. H. I. Bowditch, opened the “Bowditch Library” in Boston, free to those who lived in the area. The collection (originally 2,500 books, 500 pamphlets, 100 maps, and 29 volumes of manuscripts) was eventually donated by his descendants to the Boston Public Library (link).

Weems readily acknowledged the work of Bowditch even as he made the transition to navigating the skies. He instructed in Air Navigation:

In practice, the navigator buys his charts. If the student is interested in the method of construction used by the cartographer for making Mercator charts, see Bowditch’s “American Practical Navigator.”

In 1932, Weems compiled the first Air Almanac, used by pilots for celestial navigation. Later, as pointed out in the National Air and Space Museum’s marvelous Time and Navigation exhibition and catalog, he believed the old seafaring technique of “line of position”—using a variation of sextant reading of the angle between two stars—could be used between the earth, the moon, or the sun in space. Weems’ Line of Position Book (1928) and Star Altitude Curves (1928) had set the course for the go-go years of air navigation from the 1920s.

Commander Weems in a 1968 interview with The Washington Post stated: “My generation is the last one that still kept in contact with basics, with principles. Now we spend billions and billions on black boxes – radar and computers and all – but too many people are ignorant of the principles that these things are all about.” (link)

Weems might not have been startled then (only displeased) when his own Naval Academy dropped the instruction of celestial navigation to cadets in 1998. However, with the threat of cyber warfare, the class was taken up again in 2016.

Bowditch’s instruction manuals of astronomical tables and meteorological information were an important predecessor, as reflected in Weems’ own library. Weems wrote, that Bowditch “supplied excellent nautical tables, with the result that celestial navigation became standardized and sufficiently accurate to meet the needs of the mariner.” (“Celestial Navigation” Proceedings of the American Philosophical Society, August 16, 1954, pages 270-272). Where Bowditch was America’s leading expert on marine navigation, Lieutenant Commander Weems became the leader of aerial navigation in the dawning era of transoceanic flights. Remarkably, there are no complete bibliographies of writings of these two pioneers. In addition, tracing of their own private libraries provides scholars with insights into how these two remarkable men developed their own advances in technology, standing on the shoulders of earlier scientific explorations and developments.