An Exploration of the Smithsonian’s Special Collections, from Pliny the Elder to Sir Isaac Newton 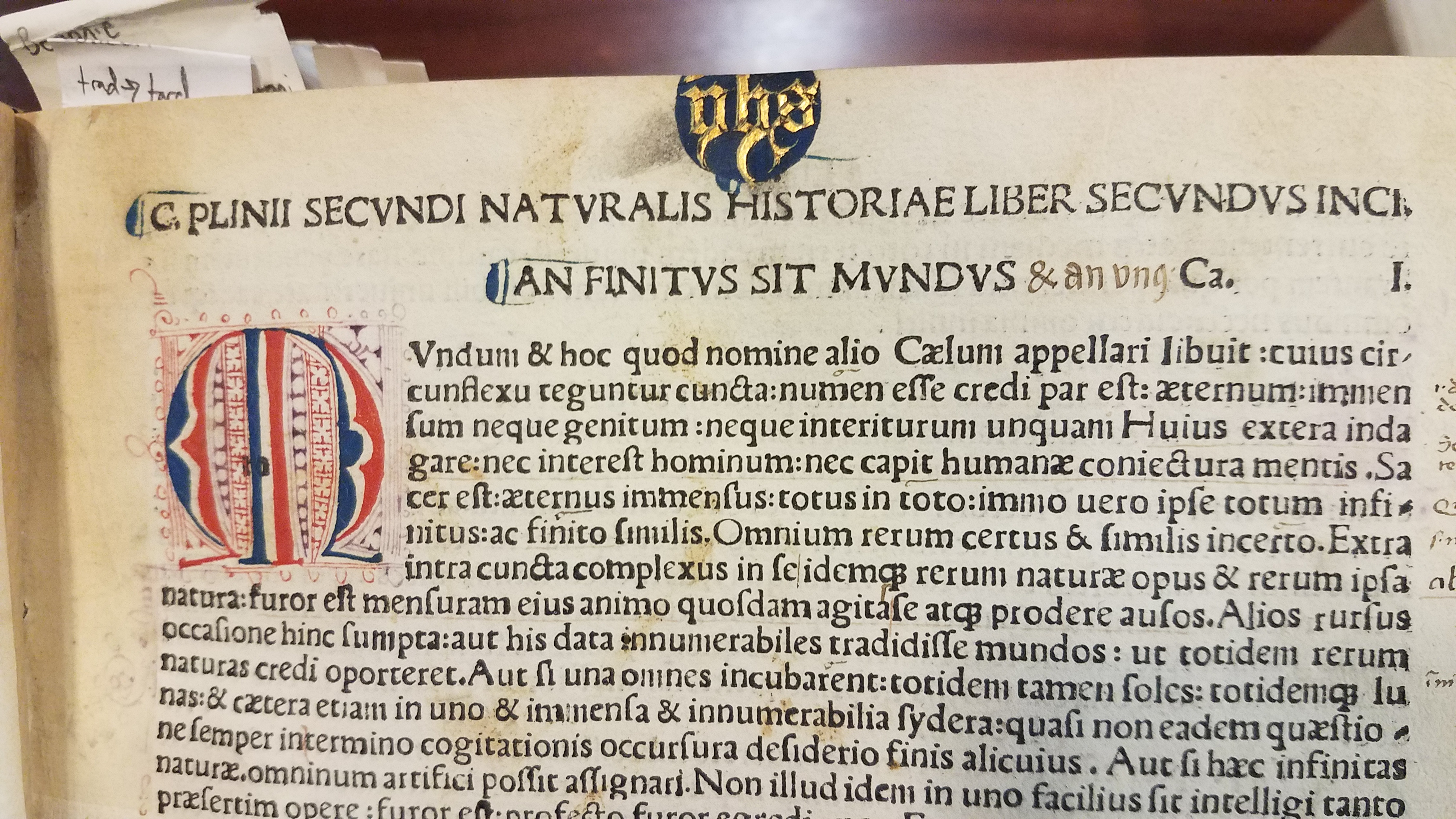 This summer, I interned at the Smithsonian Libraries Research Annex (SILRA), where I worked with books from the Center for Folklife and Cultural Heritage (CFCH) Research Collection. This experience provided me with great insight into the workings of an active research library, and allowed me to explore an eclectic collection of books ranging from titles as diverse as American Murder Ballads to Cowboy Jamboree. This was a very exciting collection, wherein my fellow intern and I found inscriptions and letters by CFCH founder Ralph Rinzler, record executive Moses Asch, and even a dedication addressed to former U.S. President Jimmy Carter (read intern G. Goldberg’s blog post about the experience). Illuminating the songs, histories, art, and folktales of dozens of countries, this collection provides a wonderful glimpse into cultural heritage both in America and around the globe. Every book I handled for this project was printed after 1840, as books printed before this date are placed in special collections.

While 1840 was the cutoff for the work I was doing at SILRA, I was given the opportunity to tour several other Smithsonian libraries, archives, and special collections containing older materials during my time here, providing me with a broader understanding of the Smithsonian’s collections as a whole. It was within these special collections that I found some of the books that piqued my interest the most. At the Dibner Library of the History of Science and Technology, the head of the Special Collections department, Lilla Vekerdy, led us into the stacks to a table full of wonders. She carefully opened a four-flap folder to reveal the handwritten notes of Sir Isaac Newton concerning the vegetation of metals. This has nothing to do with plants, but refers instead to transmutation—in other words, alchemy! This was still considered a legitimate science at the time, and indeed, most of Newton’s writings concerned chemistry and religion rather than physics, despite that being his claim to fame.

Lilla also showed us an adorably miniature book from 1918, and an accordion-style book celebrating the completion of the tunnel under the Thames that, when looked through, creates the sense of a three dimensional scene. Also on display was a 1570 copy of Euclid’s Elements containing innovative “pop-up” components allowing readers to construct three dimensional shapes. Finally, Lilla showed us an undated Armenian prayer book. While the text of the book was likely from the early 16th century, Lilla had noticed something peculiar beneath the text of the pages—writing that appeared to be much older. This is known as a palimpsest—a manuscript page from which older text has been partially removed in order to make room for new printing. Thus, these pages of the book could be centuries older than previously thought, and will undergo testing in the coming months to determine its real age.

Of all the incredible books I’ve seen at the Smithsonian, my favorite is tucked away within the collections of the Joseph L. Cullman 3rd Library of Natural History—a 1491 copy of Pliny the Elder’s Natural History, or in his native Roman tongue, Naturalis Historia, written between 77 and 79 AD (coming to a premature end when, famously, Pliny died while observing the eruption of Mount Vesuvius). This ambitious book aimed to document all ancient knowledge of the natural world, and I would argue that Pliny goes above and beyond—quite literally—as a great deal of the book contains outlandish claims about fantastical plants and animals that have certainly never existed. This makes for an entertaining and fascinating read.

Sitting down with Allie Alvis, the Reference Librarian at the Cullman Library, I was able to learn a wealth of information about this fascinating work. It is considered to be an incunabulum, a term which describes books printed in Europe before 1501. This term comes from the Latin meaning “cradle” or “swaddling clothes,” as it refers to books created when print was still in the cradle as a technology. Opening the book, I was awestruck. The text is crisp, the colors are vibrant and wonderfully decorated, and the pages are in excellent condition, save for some of the margins being cut short (likely due to a previous re-binding).

Although this book boasts beautiful red, blue, and purple initials, color was not the standard for books of this time. The original print would have been black and white, but this particular copy went on to be rubricated, or professionally decorated. After the book was printed and sold, the buyer could hire a rubricator to go over the whole book in color, delineating sections and adding to the overall appeal of the pages. But what might happen if a buyer wanted a colored text but couldn’t afford a rubricator? Allie remarked, “There do exist editions where the buyer filled it out himself. It’s usually pretty obvious that it’s not a professional rubricator. It’s kind of messy, or weird.”

Allie’s favorite feature of the book is the marginalia—the comments in the margins written by several different readers. The history of how the book traveled from its original destination to the Smithsonian was undocumented, but based on the content of the marginalia, Allie was able to deduce that it likely came from the monastery of Santo Stefano in Bologna, Italy. This would explain why so many different people (identified by differing handwriting) would have been commenting on the same edition, and would also explain the ability of the buyer to afford rubrication. Although these monks wrote primarily in Latin, commentary in Italian, German, and Greek is also present. Even without training in paleography, my background in classical Latin allowed me to make sense of the more legible writing. The marginalia quickly became my favorite part as well, for reading the reactions of people reading the very same text as me, but 500 years earlier, is an almost surreal experience. You can learn more about the marginalia in this book with Allie’s 2018 blog post.

After my conversation with Allie, I was left to myself with the book. Investigating the pages myself proved to be a rewarding endeavor. The passages were wonderfully strange, and the commentary amusing.

One of my favorite sections was “De muribus nili,” or “On Mice of the Nile River,” wherein Pliny records a bizarre theory detailing a species of mice that is born from the riverbed. When the Nile recedes, Pliny writes, the beginnings of small mice can be discovered there. Generated from the water and the earth, one part of the body can be found alive, while the newest part of the body is still composed of dirt. Pliny does, however, acknowledge that this event is a marvel which makes the other things he has reported look even more credible by comparison.

Curious as to what the Benedictines had to say about this, I began attempting to decipher the marginalia. While one commentator had very difficult handwriting—I could only make out “Et hic,” which can mean “and this” or “even this” in Latin, another commentator had more legible script. Next to this section, he wrote “deredente.” Although I could not find “deredente” in any dictionaries, I was delighted to find “deridente,” which means something along the lines of mocking and scoffing, from which we’ve derived the word “derision.” I’m glad to see that the humor is not lost on my fellow 15th century reader. This text is quite laughable, although it’s all the more interesting for it!

Another curious creature of the sea is described in the section “De stellis marinis,” or “On stars of the sea.” Pliny states that “I see that authors, distinguished in wisdom, are surprised by stars in the sea.” But this is far from the most surprising thing that Pliny records. He goes on, reporting that the sea star “has such a boiling flame in it that it would scorch everything it contacts within the sea” and “Omne cibum statim peragat”—it digests all of its food instantaneously. The image of a starfish with the ability to scorch prey is rather amusing, and I have to wonder if Pliny is conflating stories of jellyfish with those of starfish. Pliny states that he is uncertain of what kind of experiments were conducted to generate this knowledge. Again, I investigated what the commentators had to say. After puzzling over the script, I was amused to find that one monk declared that no such experiments exist to prove these theories. It would seem that the Benedictines were just as skeptical of Pliny’s most fantastical accounts as we are today.

One mystery remains to be solved. In the very back of the book, an entire page is written in a code that has not yet been deciphered. It has been identified as a pigpen cipher, which utilizes a grid system wherein each part of the grid indicates a different letter. A few of the words have been translated, and it appears that the code discusses such mundane things as bushes with thorns and recipes for candles. “It’s really sort of normal stuff, so I don’t know why it’s in code, unless someone was just practicing their code. It’s just like…why?” Allie laughed. My time at the Smithsonian has been incredible, so I’ll certainly come back—and when I do, maybe I’ll try my hand at cracking the code. After all, I need that candle recipe.