Fountain Pens from Christmas Past 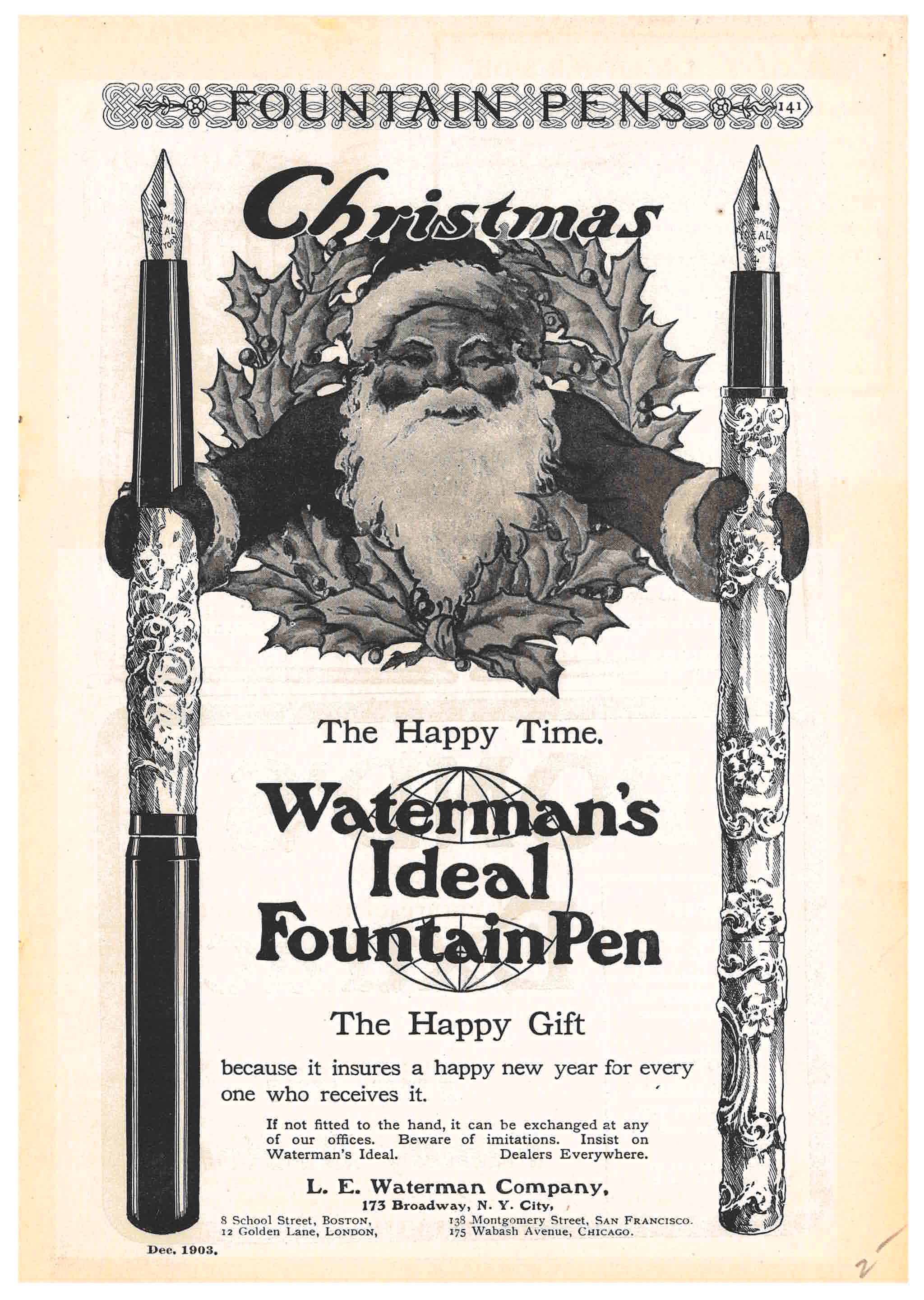 Imagine holiday shopping in the early 20th Century. What types of gifts did people give? What was on a holiday wish list? Perhaps these Christmas advertisements from the early 1900s will give us some ideas.

The Trade Literature Collection includes two Christmas advertisements from L. E. Waterman Co. advertising Waterman’s Ideal Fountain Pen (December 1903 and December 1904). Because handwritten letters were a common method of communication at the time, it is not surprising that a cherished Christmas gift might have been a fountain pen. In the December 1903 L. E. Waterman Co. advertisement shown below, Santa is holding Waterman’s Ideal Fountain Pens.

Very little detail about the pens, besides the images, is included in these particular advertisements. The December 1904 advertisement mentions the company’s catalog of gift pens, and both advertisements give information on company locations.

However, the Libraries’ Trade Literature Collection includes other catalogs by L. E. Waterman Co. with a bit more information on the pens and their design and development. One of these pieces is the Golden Anniversary issue of the Pen Prophet (1934) which shares information on the design of L. E. Waterman’s fountain pens. In the early 1880s, Lewis Edson Waterman designed a three-fissure feed for a fountain pen which allowed ink and air to flow in opposite directions and controlled the flow of ink. He received a patent for it in 1884. L. E. Waterman Co. went on to sell other products, including Waterman’s Pencils and Combination Writing Sets of both pens and pencils.

The Golden Anniversary issue of the Pen Prophet (1934) ends with a list of the “Awards of Merit” won at expositions. One exposition listed is the 1904 Louisiana Purchase Exposition in St. Louis. The December 1904 Christmas advertisement shown above also mentions a Grand Prize won in St. Louis.

Waterman’s Ideal Fountain Pen Christmas advertisements (1903 and 1904) and other trade catalogs by L. E. Waterman Co. are located in the Trade Literature Collection at the National Museum of American History Library.