The Fix: Reusing Original Leather in a New Rebinding 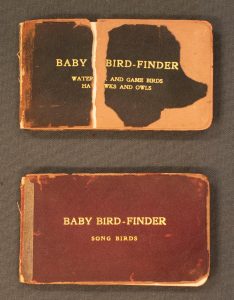 As with many of the books that come into our lab, the Baby Bird-Finder (1904-1906), a two-volume illustrated bird guide, was intended to be used. And used these volumes were, though not to find baby birds as the title suggests, but to identify bird species in New England and other Northeastern states. The “Baby” in the title refers to the diminutive, portable size of the volumes. Volume I covers song birds, such as flycatchers, larks and sparrows; volume II includes water and game birds, hawks, and owls. The volumes are illustrated, and include blank pages for birders to record their notes and observations. Both volumes are housed in our Joseph F. Cullman 3rd Library of Natural History and were adopted for conservation through our Adopt-a-Book program in 2017.

While the text blocks of this early 20th century set endured time and use relatively well, the bindings and box were in poor condition and required extensive treatment. The spines of both volumes were missing (Fig. 1), and as such the front covers were detached and in the case of the water and game birds volume, broken in two (Fig. 2). The original binding was made from thin acidic boards and the leather was similarly thin and brittle, thus requiring that the binding be completely replaced in order to give adequate protection to the text block and stabilize it for safe usage.

After completely detaching the boards from the text block, I was relieved to be able to remove the fragile recto (front-facing) leather from the boards with relative ease. I prepared the text block for rebinding, and then was able to move onto the most exciting step in the treatment – creating a new binding that would integrate the original recto leather into the new binding.

Once the boards were measured and cut, I was able to begin the process of creating a depression for the original leather. First, I glued pieces of paper of the same thickness as the leather on top of the four boards (these being the front and back for each of the volumes). I then placed each of the two recto leather pieces on top of two of the boards and traced their outlines with a pencil. Using a sharp knife, I cut along the outline and peeled away the paper inside, making space to fit the original piece of leather into the board (Fig. 3 & 4).

Next we chose to use special aero linen cloth to cover the boards. The cloth was carefully toned with acrylic paint to match the color of the leather. This is part of the conservation work I particularly enjoy as it is an opportunity to play with colors and tackle the challenge of re-creating a specific shade.

I attached the new boards to the textblock and began the task of pasting the cloth onto the boards. It was particularly difficult to cover the recto boards in which the space for the leather had been carved out. What made it difficult was the fact that for pasting the cloth, I had to use a certain adhesive that dries fairly quickly, which meant that I had little time to make sure the cloth was rubbed well into all the little corners inside the carved-out spaces.I was grateful this step went without hiccups as there was little margin for error. Finally, I applied adhesive to the back of the original leather and carefully placed and rubbed the two delicate pieces into their respective carved out spaces (Fig. 5 & 6).

Now that the leather is level with the rest of the board it is hard to feel where the cloth meets the leather (Fig. 7 & 8). This is important both aesthetically, but also to minimize further damage to the leather through contact and abrasion.

Now both volumes of Baby Bird-Finder are conserved in a manner that is as close to the original as possible, and safe for use and study. Baby Bird-Finder has also been fully digitized and is available in the Biodiversity Heritage Library.