Reimaging a Classic: the Arion Press Edition of “The World Is Round” 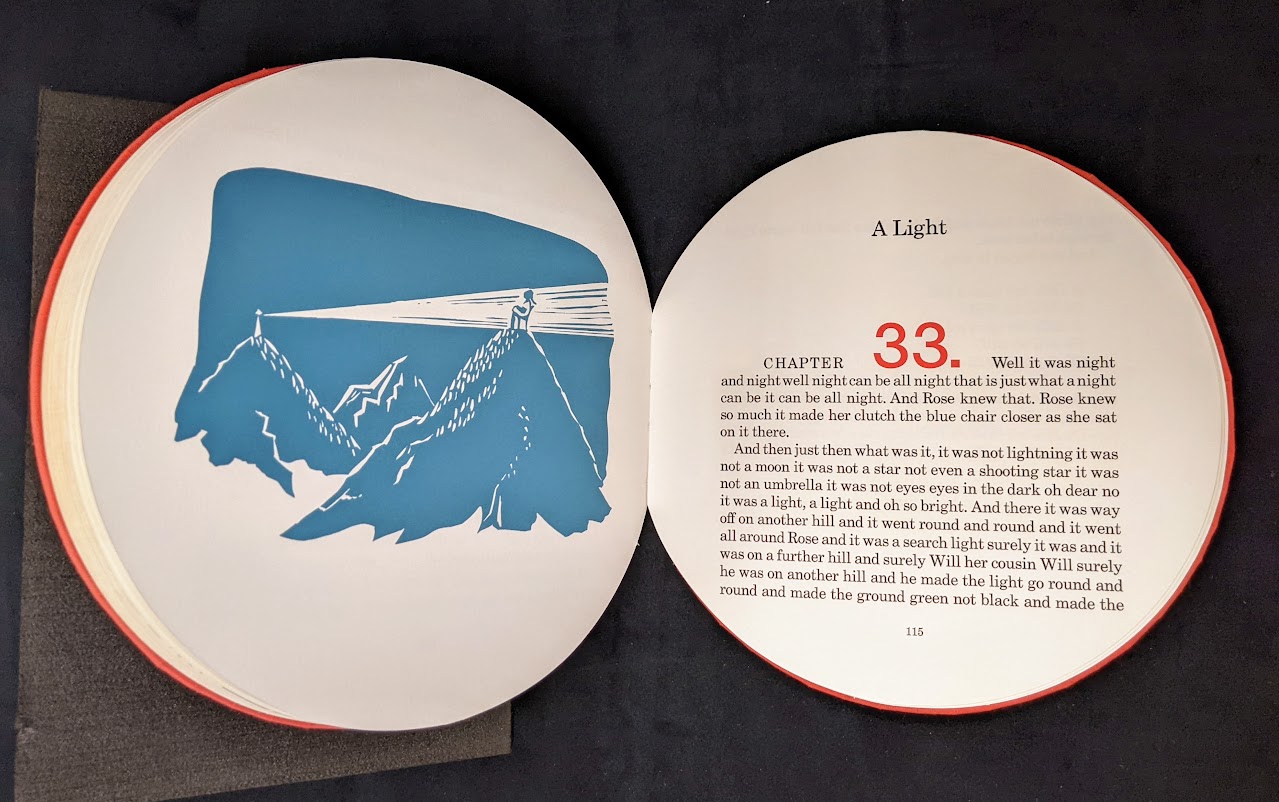 Recently, the American Art and Portrait Gallery Library received a generous donation of Arion Press books from the collection of Dr. Ronnyjane Goldsmith. The Arion Press, founded in 1963, blends literature and art in creative and unexpected ways.

One title from this collection is Gertrude Stein’s The World Is Round, illustrated by Clement Hurd. Gertrude Stein was well known as an author, poet, and art collector who was part of the modernist movement. While there was doubt children would understand a story written by an author who had only written for adults so far, Stein was contacted by the publisher Young Scott Books at the urging of author Margaret Brown Wise (author of Goodnight Moon) to write a children’s book. Coincidentally, Stein had been working on a children’s book and readily accepted. From the beginning, Stein insisted on selecting and working closely with the illustrator so that the entirety of the book, not just the text, matched her vision. Ultimately, Stein selected Clement Hurd, the future illustrator of Goodnight Moon.

Originally published in 1939, The World Is Round follows a young girl named Rose and her exploration of the world around her and her place in it. The character of Rose was based on the daughter of one of Stein’s neighbors who she was particularly close with. Written much like a poem, the text is short and somewhat enigmatic, coupled with whimsical illustrations throughout. Stein insisted that the pages be pink (a reference to the main character Rose) and that the illustrations and words be printed in blue ink (Stein’s favorite color), which was not an easy feat for the publisher. Stein had a very clear image of what Rose should look like and worked with Hurd as he illustrated the protagonist and her perspective of the world. The reception of the book was mixed, as some critics believed it was too advanced for most children, while others believed it was expertly written in a form that children could relate to. You can see a copy from the Beinecke Rare Book and Manuscript Library at Yale University Library on their site.

The World Is Round was reissued in 1966 by Young Scott Books. Since Gertrude Stein had passed in 1946, Hurd was the primary creative lead for this reissue. For the 1966 edition, Hurd decided to revisit his illustrations with a better understanding of the story and years of experience. Perhaps the most drastic change was a new image of Rose, which he believed was more relatable to a larger audience. This time the paper was white, black ink was used for the words and illustrations, and pink ink was used primarily to enhance the illustrations.

Hurd then worked with Arion Press to create a new edition that was released in 1986. Arion Press is known to produce beautifully crafted and imaginative editions of classic books that play with illustration, literary content, and the book’s physical form. This edition included the book, a companion book, and a balloon, all housed in a box. This time around, Clement Hurd made some more alterations to his illustrations, using his wood and linoleum blocks from the 1966 edition and transformed them into photo-engravings. The book used white paper, and illustrations were printed in blue ink and the text was printed in black. Playing on the title, the physical book is in the shape of a circle and comes with a balloon printed with the book’s title. While pink was not used for the illustrations or the paper, various tones of pink were used for the cover of the books and the box. Despite the alterations to Stein’s original design ideas, the continued use of pink in the various editions serve as a clear homage to her wishes and creative input.

A companion book, titled The World Is Not Flat, is included in the box and is a fantastic addition to this edition. The small square-shaped book was written by Edith Thacher Hurd, a children’s book author and Clement Hurd’s wife, and details the history of the book, providing insight into the creation of the different variations. Included are letters between Stein and Hurd, which allows the reader to better understand their working relationship and how they navigated this collaboration.

The World Is Round was the 18th title published by the Arion Press (view their catalog for a full list). The American Art and Portrait Gallery Library has two copies of this edition out of the 400 copies printed. Come and view this title (unfortunately, we can’t blow up the balloon for the full experience) as well as many other artfully made Arion Press publications at the AAPG Library!