A Few Options for Cooking in the 1860s 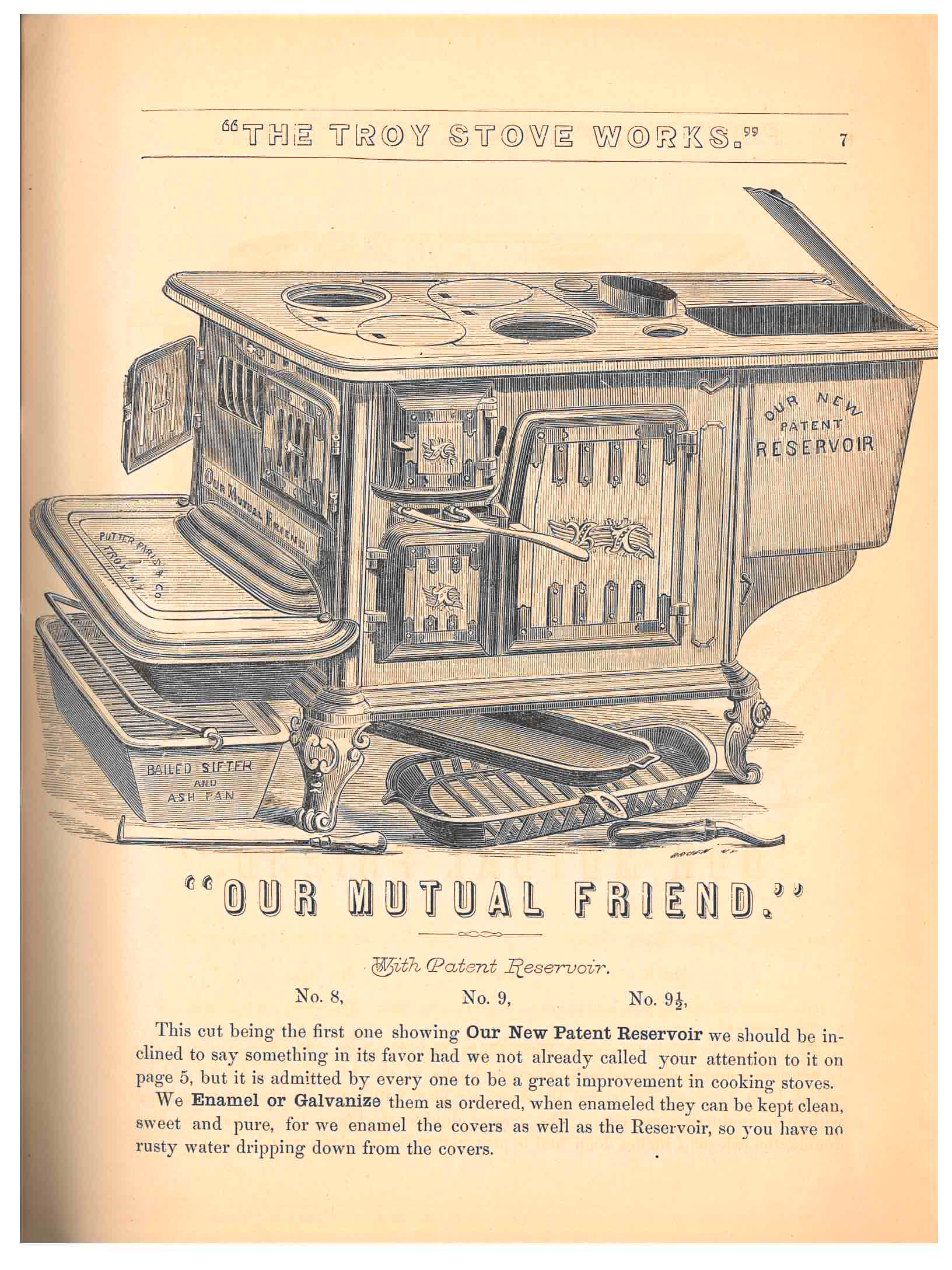 With Thanksgiving just around the corner, we might be thinking of delicious food. Or perhaps we are realizing how much time it will take to prepare such a meal. Modern kitchen appliances have made cooking easier but imagine what it was like to cook on a stove, such as one of these, in the 1860s.

This trade catalog is titled Catalogue of Stoves (1866) by Potter, Paris & Co. The company was established in 1848 and manufactured stoves and related accessories.

Just prior to the publication of this catalog, the company built a new foundry during the Summer and Fall of 1865. It was called the Troy Stove Works and occupied 22 lots in Troy, New York. It was there that Potter, Paris & Co. manufactured their stoves.

It appears that Potter, Paris & Co. intended for this catalog to cover two years, as an introductory page includes a statement dated July 1866 explaining that the catalog “will probably be for two years, 1866 and 1867.” It also mentions that “separate cuts of any new stoves” during that time will be provided to their customers for insertion or pasting into the catalog.

But now, let’s examine a few stoves manufactured by Potter, Paris & Co. around the year 1866. Turning to page 5 of Catalogue of Stoves (1866), we spot the heading, “A Page of New Ideas.” This is where Potter, Paris & Co. presented two new inventions, both available on their stoves. These two ideas were the “New Patent Reservoir” and the “Patent Warming Oven.”

The reservoir was made of cast iron with the option of being enameled or galvanized. Its position “on a seat in rear of the back flues” allowed heat to pass “up in under the Reservoir before entering the exit pipe.” A damper controlled heat in the stove. If the damper was placed in a horizontal position, the heat was carried under the reservoir. If the damper was moved to a perpendicular position, the heat passed through the smoke pipe without heating the reservoir. This provided the option of either heating or not heating the reservoir which meant water in the reservoir could be kept warm or boiled. The New Patent Reservoir is shown below on a stove called “Our Mutual Friend.”

The other new idea was the Patent Warming Oven. Measuring 9 to 12 inches high, it was made of “a Box of Sheet-Iron, which has neither top nor bottom, placed under the stove.” The floor under the stove was covered with zinc or sheet metal, and a rack or grate was positioned to keep food being warmed off the floor. As shown in the illustration below, the warming oven included double doors.

A variety of stoves, including ones of different sizes, are illustrated in this catalog. The stove named “Good Manners” which is shown below was intended for coal or wood. It was described as “next to the best” and included the same important features as “Our Mutual Friend” which is illustrated above, though not as large and without lined doors.

“Good Manners” was part of a series of stoves of which “Our Mutual Friend” was the largest and “Good Baker” was the smallest. The reservoir is shown in the illustration of the “Good Manners” stove below (right). The illustration includes arrows which “show the direction of the heat as it passes up in under the Reservoir, and thence back to the flue.”

The smallest stove in that series, “Good Baker,” is illustrated below. Intended for hard coal or wood, it was described as “a first rate cheap Stove” and “a good stove as well as cheap.” According to this catalog, its oven was almost as large as the stove itself.

The catalog also includes pages on accessories for the kitchen. Below are illustrations of some kettles and a few pieces of hollow ware, such as pots and a pan.

Catalogue of Stoves (1866) by Potter, Paris & Co. is located in the Trade Literature Collection at the National Museum of American History Library.