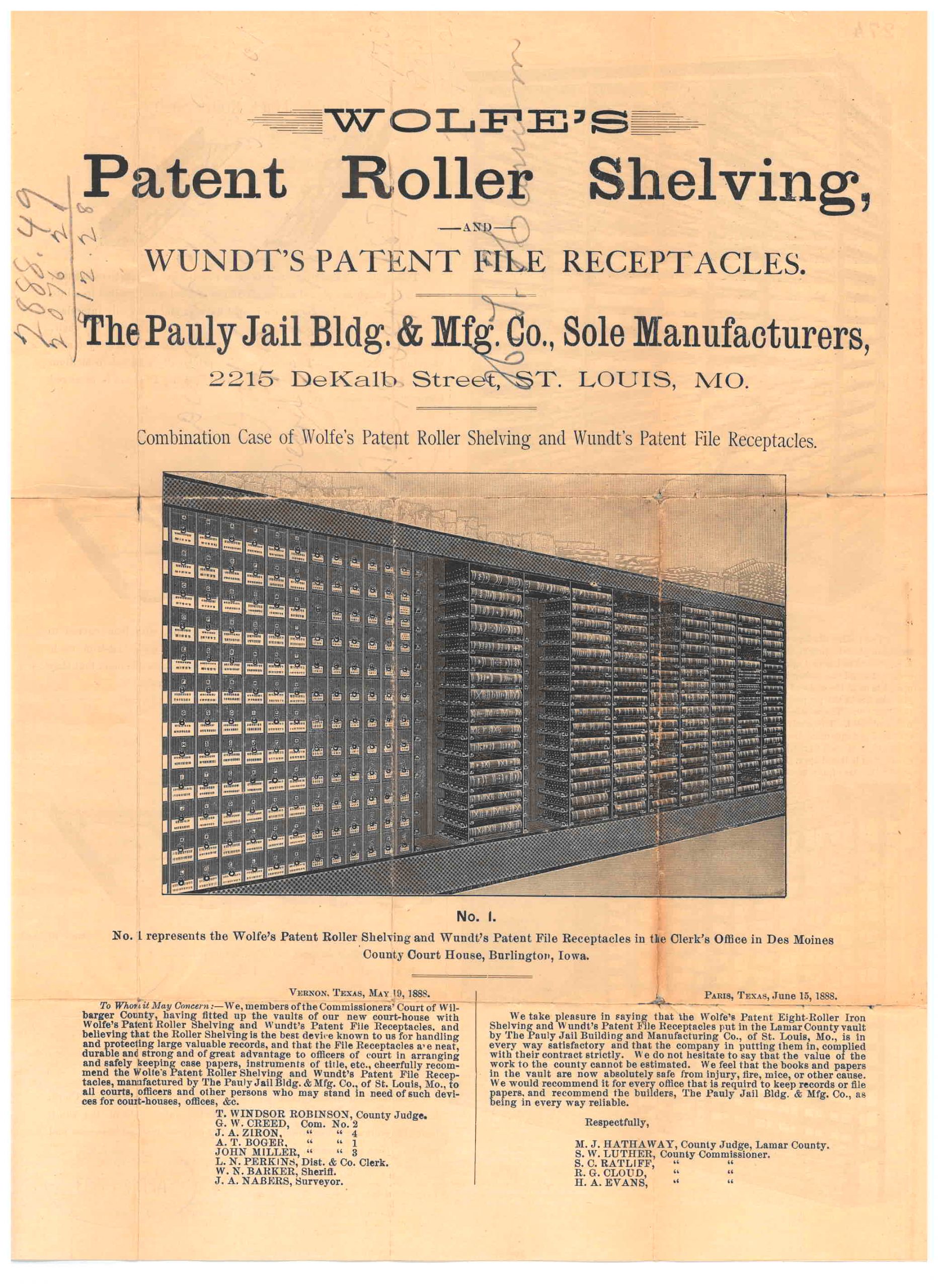 As a new year begins, the idea of sorting or reorganizing files might be running through our minds. Without the use of computers, how were important records filed or accessed in the late 19th Century? This trade catalog provides a few hints, especially for workplaces such as courthouses and clerk’s offices.

The trade catalog is titled Wolfe’s Patent Roller Shelving, and Wundt’s Patent File Receptacles (circa 1888) by Pauly Jail Building & Mfg. Co. It includes illustrations and descriptions of these two filing devices along with testimonials from offices and courthouses who used the systems.

The two systems could be installed separately or combined to create a combination case. The front cover, below, shows a combination case of Wolfe’s Patent Roller Shelving and Wundt’s Patent File Receptacles installed at the Clerk’s Office of the Des Moines County Court House in Burlington, Iowa.

Printed on the last page of the catalog is an extract from an article in the Ohio State Journal dated July 14, 1887. It provides some background information on the development of Wolfe’s Patent Roller Shelving. From this extract, we learn that Mr. M. P. Wolfe was the patentee and developed the idea of the Roller Shelving while he was a recorder at the Montgomery County, Indiana Courthouse.

As described in the extract, the courthouse was being furnished “with bookcases, consisting of flat shelves, for the books to lie on.” Mr. Wolfe suggested the idea of rollers replacing the shelves. From his experience, this would make it easier to retrieve and re-shelve the large volumes. Following that suggestion, he experimented with his idea, especially in regard to friction. This led to the development of Wolfe’s Patent Roller Shelving.

Though the article mentions Mr. Wolfe as the patentee and developer of the idea, it also mentions Mr. Wundt as the “manufacturer and proprietor” of the system. A testimonial on the same page, dated July 3, 1888, by the County Commissioners of Barry County, MO, mentions File Receptacles patented by C. L. Wundt and Patent Roller Shelving patented by M. P. Wolfe.

Let’s explore these systems in a bit more detail. Wolfe’s Patent Roller Shelving, illustrated below (top left, “No. 5”) was intended for shelving large volumes of record books. The volumes were shelved flat, and rollers aided in gently and carefully “rolling” the books onto and off the shelves. This was meant to lessen wear and tear on the books and extend the life of their binding.

The casing for the roller shelves was constructed of flat and upright iron bars, cross bars, iron braces on the back to provide stability, and a cornice and base. This created tiers for the storage of books lying flat. The ends of the case were open for ventilation purposes and to allow access to air and light. Galvanized iron at the top of the rack, meant to keep away dust, completed the casing.

The standard arrangement consisted of tiers measuring 19 inches long, 13 inches deep, and 16 books high with space for a thickness of 4.5 inches for each book. However, it was possible to create shelving for other size books as well. The number of tiers depended on how much space was available in the room where the case was installed. There were also choices for the number of rollers on the shelving. Details of a double-track system, six-roller system, and eight-roller system are shown in the illustration above.

Now let’s explore Wundt’s Patent File Receptacles, shown below (top right and bottom right). A testimonial, dated May 19, 1888, written by staff of the courthouse in Vernon, Texas, describes, the File Receptacles as being useful for “arranging and safely keeping case papers, instruments of title, etc.” It consisted of many small, individual file boxes in a large case.

The case for the File Receptacles consisted “of galvanized iron with wrought iron bars placed at regular distances.” To hold the weight of the materials stored in the File Receptacles, iron bars were positioned both upright and across. The size of the case depended on the number of file boxes.

The individual file boxes were made of “I. C. tin” and each box measured 4.5 inches wide, 6 inches high, and 10 inches deep. For an extra cost, other sizes were available. Each box came with a card label to place on the front of the box for noting the contents of the box.

Another useful device illustrated in this catalog is the Roller Shelving Car (above, top left). This was handy when transporting a large number of volumes around an office but there was one important detail. It required a track to run on, as shown in the illustration. The measurements of the car could be custom-made to hold a desired number of books, as many as 70 or even more.

Several testimonials are shared in this catalog. Many are written by staff of courthouses and clerk’s offices. They comment on the amount of space saved when installing these devices, the convenience of handling items stored in these systems, and the ability to decrease wear and tear as books were retrieved and re-shelved.

J. W. Williams from the Clerk’s Office of the District Court in Lincoln Parish, Louisiana wrote on July 17, 1888: “The Roller Shelving is splendid! No Clerk’s office should be without it. The File Cases are very convenient and come fully up to my expectation, but the Roller Shelving is the one thing that cannot be dispensed with, nor substituted by anything else in the Clerk’s office.”

According to another testimonial, Wolfe’s Patent Roller Shelving was installed for 150 books in Bedford County Court in Liberty, Virginia. On June 18, 1887, Clerk R. S. Quarles shared praise by writing, “They are a great convenience and preserve the books from wear. I think the expense will be saved in a few years in the saving of rebinding books, etc.”

The File Cases were written about by staff from Houghton County, Michigan on June 25, 1887. They shared that “…the File Cases fill the bill in all particulars, and will enable us to preserve and protect our books and valuable legal papers in much better shape than we could by any other method.”