Taking a Trip Back in Time with the Camera 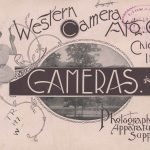 Today with digital cameras, it has become so easy to take lots of photos and instantly see the pictures.  But let’s take a trip back in time to 1897 when cameras were a little different.

Catalogue and Price List of Photographic Apparatus and Supplies by Western Camera Mfg. Co. includes three cameras from 1897–the “Dexter,” the Cyclone, and the ZAR Pocket Camera.

Capable of producing photos slightly larger than the “Dexter,” the Cyclone produced photos measuring 4 x 5 inches.  This camera was advertised as “compact and light.”  Its features included two view finders and two tripod sockets which gave it the ability to take both vertical and horizontal photographs with or without a tripod.  Another feature was the shutter which with a touch of the appropriate button was “always ready for time or instantaneous exposures.”

Advertised as a camera for “the young folks who may desire to obtain a taste of photography at the lowest possible cost,” the ZAR Pocket Camera was the third camera shown in the catalog.  This camera produced photos much smaller than the other two cameras.  The photos measured 2 x 2 inches.  Features included a single lens as well as a time and instantaneous shutter.  It was “practical in every way” and capable of “first-class snap shots and time exposures.”

Catalogue and Price List of Photographic Apparatus and Supplies by Western Camera Mfg. Co. is located in the Trade Literature Collection at the National Museum of American History Library.  More pages from this 1897 trade catalog can be found on Galaxy of Images.