Twelfth Night Traditions: A Cake, a Bean, and a King 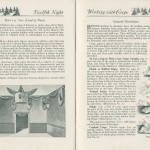 Have you heard of a cake with a bean baked into it and the man who finds the bean becomes King for the night?  That is just one tradition associated with Twelfth Night, but there are many more customs and traditions for this holiday.  Several items mentioning Twelfth Night are located at the National Museum of American History Library, like the 1923 Dennison’s Christmas Book by Dennison Mfg. Co.

Customs and traditions for this holiday can vary, and that even includes the day on which Twelfth Night should be celebrated.  Webster’s Third New International Dictionary of the English Language Unabridged gives two definitions for Twelfth Night.  Definition one is “the eve preceeding Epiphany marking the end of medieval Christmas festivities,” and definition two is “the evening of Epiphany.”  The 1923 Dennison’s Christmas Book states, “Twelfth Night is the evening of January 6, twelve days after Christmas.”

And what happens at a Twelfth Night party?  According to the 1923 Dennison’s Christmas Book, “there should be a King and a Queen, chosen by cutting a cake…”  The Twelfth Night Cake has a bean and a pea baked into it.  The man who finds the bean in his slice of cake becomes King for the night while the lady who finds a pea in her slice of cake becomes Queen for the night.  The new King and Queen sit on a throne and “paper crowns, a scepter and, if possible, full regalia are given them.”  The party continues with games such as charades as well as eating, dancing, and singing carols.  For large Twelfth Night celebrations, a costume party is suggested.

There are also other items mentioning Twelfth Night located at the National Museum of American History Library.  One of these is an 1865 cookbook entitled The Cook’s Own Book:  An American Family Cook Book.  A recipe for Twelfth Cake is found on page 40 and considering that it calls for eighteen eggs, it appears to make a rather large cake.  Another book located at the NMAH Library is Cakes and Characters, an English Christmas Tradition written by Bridget Ann Henisch.  It traces the history of Twelfth Night and different ways the holiday has been celebrated.  The appendix begins on page 203 and focuses on Twelfth Night cakes and recipes, noting that a cake for a Twelfth Night party was not necessarily called Twelfth Night Cake.  Instead, it might have had a name such as Bride’s Cake or A Great Cake, among others.

The 1923 Dennison’s Christmas Book is just one of many Dennison Mfg. Co. items located in the Trade Literature Collection at the National Museum of American History Library.  Take a look at our Galaxy of Images to see more pages from this booklet, which includes ideas for homemade Christmas decorations.