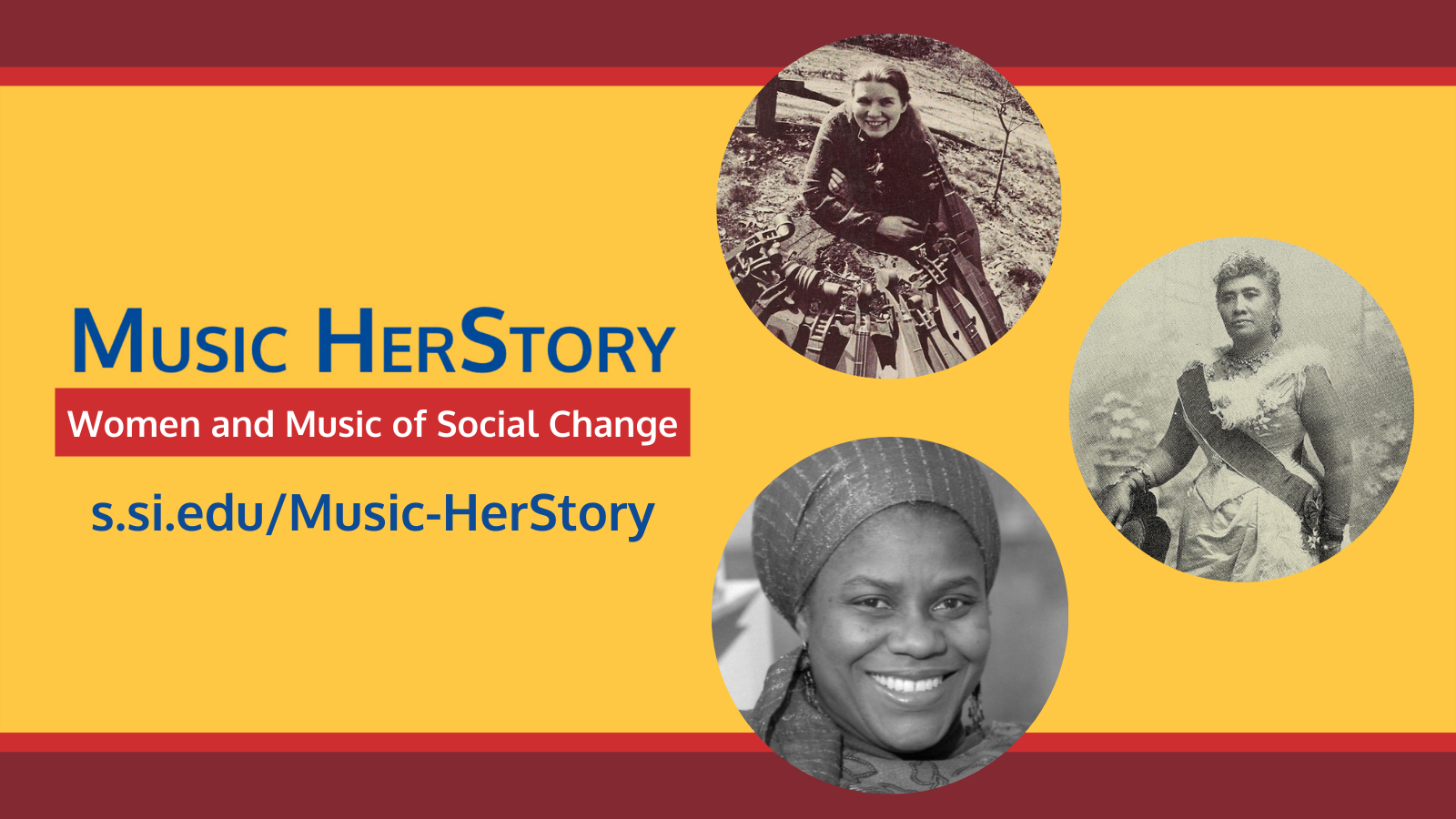 Women’s leadership in music and social change is central to the American story. From people’s earliest musical encounters to the formation of complex social identities, the American musical landscape would not be what it is today without the countless contributions of women changemakers, groundbreakers and tradition-bearers. “Music HerStory” explores these contributions through unique media collections from Smithsonian Libraries and Archives, the Center for Folklife and Culture Heritage and around the Smithsonian.

The exhibition, presented in both Spanish and English, will feature Ella Jenkins, an award-winning musician whose songbooks have taught children about a diversity of cultures and languages for over 50 years; Sister Rosetta Tharpe, the “Godmother of Rock ’n’ Roll” and a pioneer of spiritual music; Lucy McKim Garrison, an abolitionist musicologist who documented African American music in the 1800s; Queen Liliʻuokalani, the last sovereign monarch of Hawaiʻi, who was a gifted and prolific composer; and singers Dolly Parton, Kitty Wells and Loretta Lynn, who shaped the country music genre.

“With more than 16,000 musical instruments, 100,000 pages of sheet music, 80,000 recorded music tracks, hundreds of books and hundreds of musical activities annually, the Smithsonian is among the world’s largest museums of music,” said Meredith Holmgren, curator of American women’s music and this exhibition. “And yet, many of these musical resources remain unknown to the public. This is especially true for our music collections that relate to women’s history. Women have made incredible contributions to the history of music and social change. We are delighted to bring many of these stories to life in the exhibition.”

“We are thrilled to present women movers and shakers who forever altered the course of American music,” said Tamar Evangelestia-Dougherty, director of the Smithsonian Libraries and Archives. “We honor their drive, their creativity, their advocacy and their achievement, painting a portrait of their long-standing influence through Smithsonian collections.”

From Mother Goose to Girl Power, Prohibition to the civil rights movement, women have made their voices heard in the story of American music. Through rare and unique books, photographs, albums and recordings, “Music HerStory” captures their innovative contributions and courageous spirit.

“Music HerStory” received support from the Smithsonian American Women’s History Initiative. Special thanks to The Arhoolie Foundation and the DC Public Library.

Smithsonian Folkways Recordings, Smithsonian Libraries and Archives and the Smithsonian’s American Women’s History Initiative co-present “Folkways @ Folklife: Alice Gerrard and Leyla McCalla,” an event in conjunction with the exhibition, Friday, June 24, at 7 p.m. on the Rinzler Stage at the Smithsonian Folklife Festival on the National Mall. Visit the event page for more details.

Additional public programs accompanying the exhibition will engage diverse audiences from K–12 to adult, including workshops, lectures and hands-on sessions.