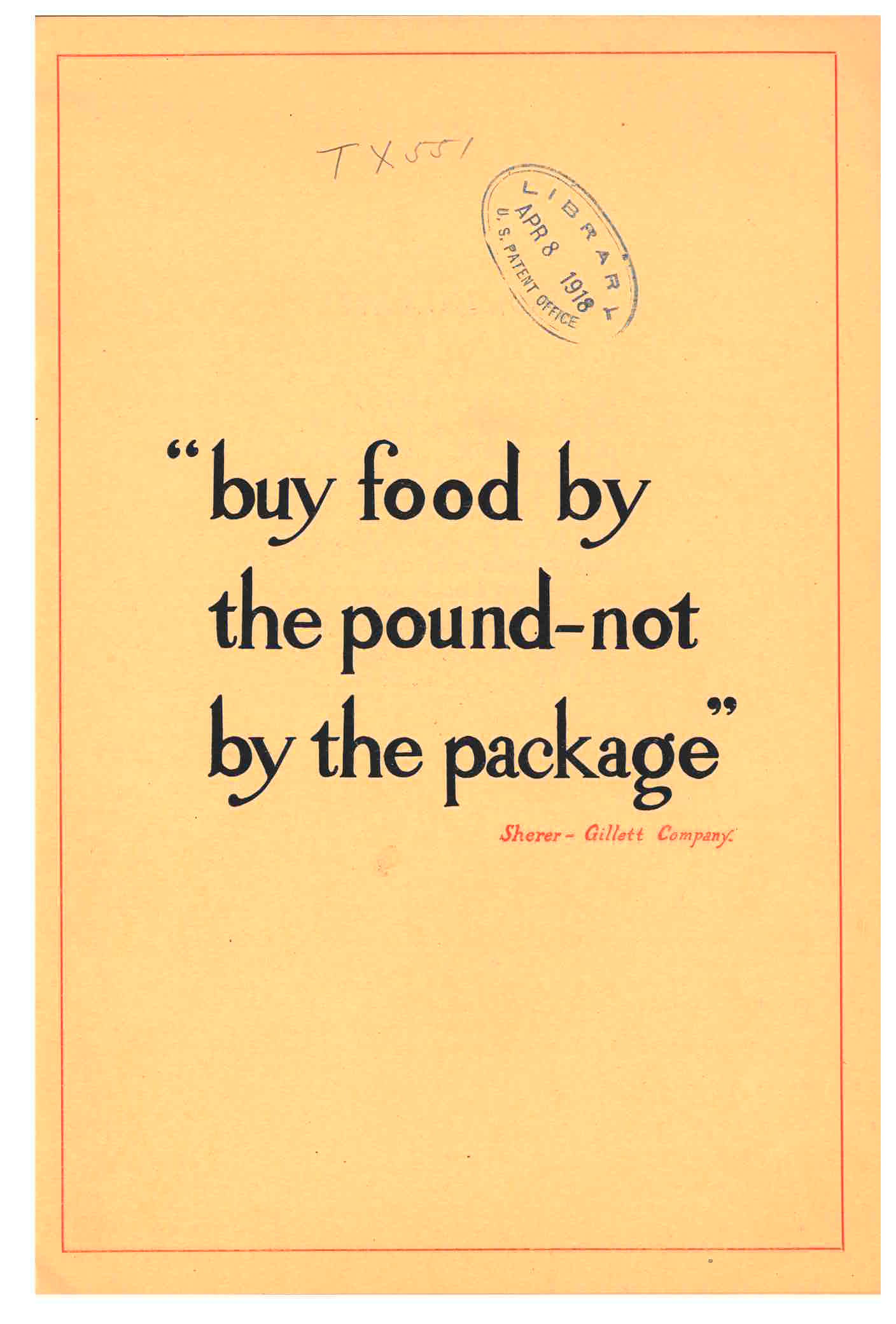 Can a particular kind of retail furniture help grocers save money and prevent food waste? In a World War I era trade catalog, Sherer-Gillett Co. promotes a piece of furniture designed for grocers to install in their stores. It was called the Sherer Counter, a bulk food storage system described as a way to cut down on waste and help with the war effort.

Let’s take a closer look at how Sherer-Gillett Co. encouraged the use of this counter for grocery stores. As shown below, the front cover of this catalog includes a quote by the U.S. Food Administration encouraging people to buy food with thought.

Then as we open this 1918 catalog, we are greeted with a quote by Sherer-Gillett Co. It also appears to be the title of the catalog. It reads, “buy food by the pound-not by the package.” This leads us to believe that Sherer-Gillett Co. encouraged the purchasing of food in bulk.

Next, we move on to the foreword. There, we learn this catalog was sent “to those who are ‘carrying on’ in food conservation.” Printed in 1918 during World War I, the catalog encouraged people by remarking, “it is pleasant to find that one’s daily vocation is in line with winning the war.”

In these introductory pages, we discover this catalog appears to be focused on preventing food from being wasted and saving money for both the customer and grocer. To accomplish this, Sherer-Gillett Co. suggested food be sold and bought in bulk. The catalog mentions that food was frequently bought by the package but suggests dry goods might be suitable to sell by the pound. Some examples include cereals, dried fruits, crackers, cookies, beans, peas, and other similar types of food. However, the catalog also acknowledges the fact that some products, such as liquids and perishable foods, are more easily bought by the package.

To help grocers and shop owners sell food by the pound, Sherer-Gillett Co. offered a piece of furniture called the Sherer Counter. The Sherer Counter was a grocery counter comprised of 31 bins with glass-front drawers used for the storage of various types of food while keeping everything fresh and clean. The Sherer Counter is illustrated at the bottom of the advertisement below.

To encourage the installation of the Sherer Counter, Sherer-Gillett Co. introduced a publicity campaign in collaboration with the Knight Co. of Chicago. Advertisements ran in grocer trade journals, and some are included in this catalog. These particular advertisements included a catchy title with a related illustration and an image of the Sherer Counter. These ads also encouraged the reader to request more information.

One advertisement begins with the phrase, “Don’t Spill the Beans!” It shows a trail of beans leading from a bag on the floor to a counter where beans are being weighed on a scale. As the beans are weighed, more beans are spilling onto the floor. This advertisement points out that if the grocer installed a Sherer Counter, the beans would be stored in “close-to-the-scale, tight-fitting, glass-front drawers” which might prevent beans from spilling onto the floor while being transferred from bag to scale.

Another advertisement weighs in on the idea of losing profit as food is spilled on the floor and wasted. The ad is titled “Why Sweep Out Your Profits?” and its illustration shows a pile of food that presumably fell onto the floor of a grocery store. The text reminds the grocer that keeping dry goods in boxes, barrels, and bags far away from the counter and scale leads to spillage and waste. In contrast, it suggests that a Sherer Counter which keeps food in specific bins near the scale cuts down on waste, thereby preventing lost profits.

Besides savings, profit, and preventing waste, another focus of the publicity campaign appears to have been cleanliness. An advertisement shown below and titled “No Waste Here!” illustrates a dog cleaning a food dish spotlessly clean from any crumbs. In this same advertisement, the Sherer Counter is described as a way to keep 31 types of food “immaculately clean-perfectly safe!” in its individual food bins.

This trade catalog, “Buy Food by the Pound-Not by the Package” (1918) by Sherer-Gillett Co., is located in the Trade Literature Collection at the National Museum of American History Library.