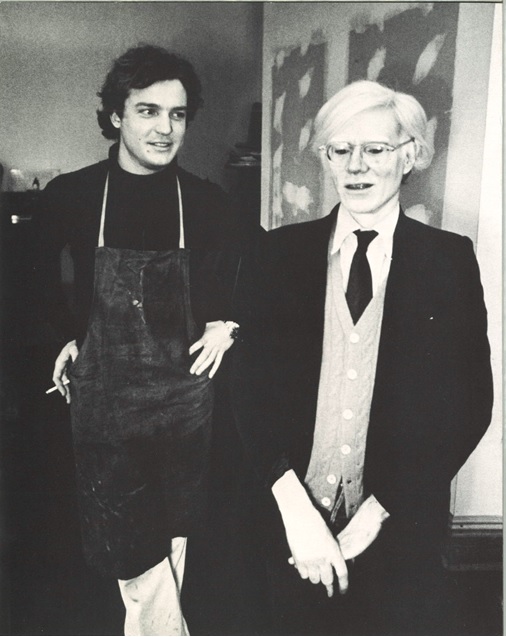 This post was written by Sofia Silva, Katzenberger Intern at the Hirshhorn Museum and Sculpture Garden Library and American Art & Portrait Gallery Library as part of a series exploring the Art & Artists Files at the Smithsonian Libraries.

Though contemporaries, the artists James Browning Wyeth and Andy Warhol could not be more diametrically opposed. James, more commonly known as Jamie, is a third-generation member of the famed Wyeth family, who are celebrated as central figures in the revival of realism in American art (his father is Andrew Wyeth, painter of the American classic Christina’s World and his grandfather, N.C. Wyeth is acclaimed painter of vast landscapes and epic narratives of early Americana). Jamie continued this family tradition as a portraitist and landscape painter, whose naturalistic approach to painting produced highly detailed and visually complex work that captured life in rural Maine, Delaware and Pennsylvania.

Andy Warhol, on the other hand, is considered to be the ultimate symbol of Pop. His early paintings presented mass-produced consumer goods (think back to his famous Campbell’s Soup paintings), while his later art evolved into mass produced objects in and of themselves, as he applied a factory-like, assembly-line method of production to his silkscreens, which treat such topics as consumer culture, fame (or infamy) and celebrity. Wyeth was an introverted, enigmatic character, while Warhol was transformed into a symbol of the New York social scene with his Factory entourage and was revered as a popular culture sensation.

Despite differences in personality and artistic philosophy, the two artists expressed deep respect for each other’s vision and work. Warhol particularly commended Wyeth’s impeccable technique, saying, “I love his work. I always wished I could paint like him.” Wyeth had always had a particular fascination with Warhol’s earlier paintings, seeing certain parallels between Warhol’s representational paintings and his own work. He stated, “I thought that the Brillo boxes and the soup cans of Warhol’s had a certain power to them. Warhol had taken the actual object, not really messed around with it or abstracted it in any way and it had a certain vitality. Why abstract the object if the object is what hits you?”

This mutual interest in the other’s work resulted in a portrait-exchange between the two artists in 1975. The outcome of this collaboration,  a collection of portraits and studies that were completed in each artist’s signature style and technique, was exhibited at the Coe Kerr Gallery in 1976.  An invitation for this unusual paring  was found in the Art and Artist Files at the Hirshhorn Museum and Sculpture Garden Library and helps document this partnership.

In the exhibit, Warhol, the “Patriarch of Pop,” is presented in a hyper-naturalistic manner, with imperfect, blemished skin, disheveled hair, and an expression that seems to suggest that he was abruptly taken by surprise. By the 1970s there was a wealth of images of Warhol circulating, making his carefully constructed image instantly recognizable to all. However, Wyeth seems to have captured a side to Warhol previously unseen that almost shockingly contrasts other representations of the most famous man in the art world. On the other hand, Warhol transforms Wyeth, a rural kid from Wilmington, Delaware, who perfected his technique by painting farm animals and landscapes, into a sort of pop star. Wyeth’s pose evokes a sense of self-possessed confidence immortalized for all time into the ranks of Warhol’s other portraits of Mick Jagger, Elizabeth Taylor and John Lennon. Two examples of this collaboration form part of the National Portrait Gallery’s permanent collection. The works are studies by each artist, which reveal how the final products were developed.